The Mountains Are Calling - Adapted Extract

The Mountains are Calling tells the story of hill running in Scotland. Charting the evolution of the sport from the world’s first hill race in the wild and dangerous times of the 11th century Highlands, and heralding a culture built on traditionalism and understated fortitude, Jonny Muir captures the essence of a sport he describes as a ‘beautiful madness’. In this adapted extract from The Mountains are Calling, Jonny explains the part Skyline Scotland plays in that story.

‘However often I walk on them, these hills hold astonishment for me,’ Nan Shepherd wrote in The Living Mountain. She was referring to the Cairngorms, but her words hold truth for all the high places of Scotland. ‘There is no getting accustomed to them,’ she added, as if awestruck. It is these glens, hills and mountains that are the stadiums, theatres and cathedrals of hill runners. Sporting arenas are as renowned as the teams and sportsmen and women who inhabit them: St Andrews, Aintree, Wembley, Lord’s, Wimbledon. Few arenas are more exceptional than Glen Coe – above which rises the crown of extraordinary peaks that garland the Glen Coe Skyline. 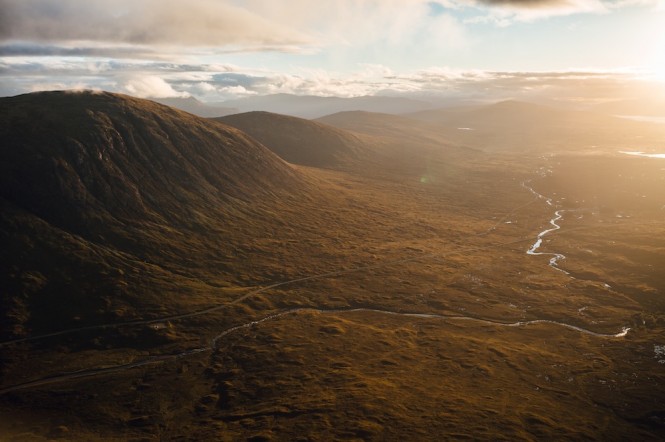 ‘Glen Coe is no great beauty,’ W.H. Murray wrote in his Companion Guide to Scotland. ‘It is bare and bleak, adorned by neither tree nor heather,’ he continued, offering a ‘wild and ugly majesty. When you lift your eyes from the glen to the mountains towering above, you see an array of rock peaks, packed close, trenched by ravines, of its own kind unrivalled.’ We – the hill runners – ran into that ‘unrivalled’ place: a jumble of crags, ribbons of scree and precipitous drops, over Stob Coire Sgreamhach, along a ridge high above the Lost Valley, immersed in a screen of cloud to Bidean nam Bian.

From the summit, a lean finger reached east to Stob Coire an Lochan. We went out and came back, touching the top of Bidean nam Bian for a second time, then snuck along a rocky backbone, sank into a corrie and thereafter a gully of long grass and boulders, descending abruptly to the floor of the glen. I turned my head for a moment, looking back, astounded. Then I looked forward – and up, and up. 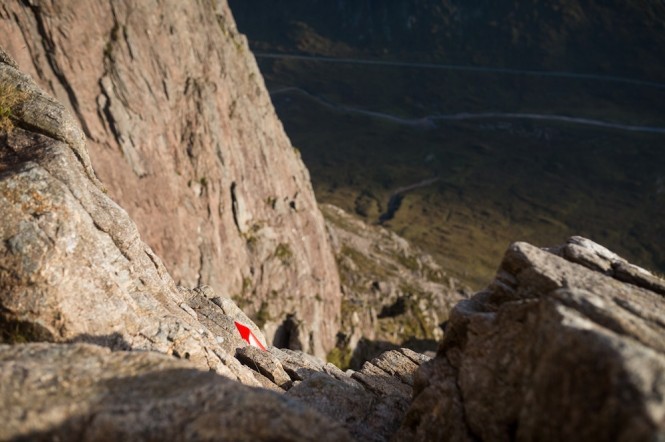 Hill running could then have seemed utterly nonsensical. From the road that dissects Glen Coe, the summit of Sgorr nam Fiannaidh is scarcely a mile away. But this is a prodigiously steep mile, a mile of literal crawling, a mile that climbs higher than any manmade structure on Earth, and at 59 minutes, a mile that might be the slowest I ever ‘run’.

Yet the climb seemed incidental, for something even more exceptional lay ahead – even more exceptional than the ascent of Curved Ridge that had carried us onto the crest of Buachaille Etive Mòr some four hours earlier. Looking east from the summit, out there, somewhere, was the saw-edge of the Aonach Eagach, buried in clag. 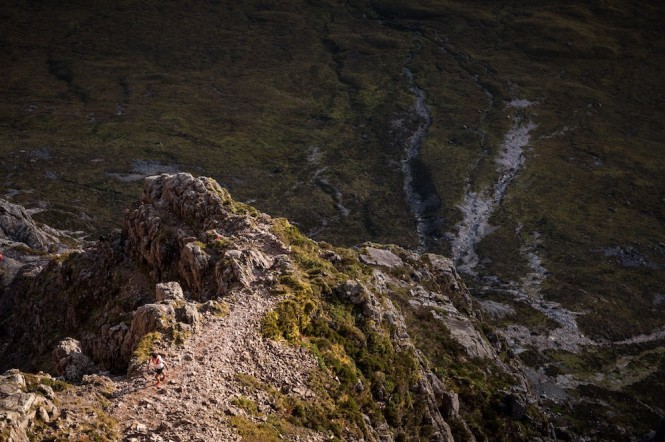 In truth, there is little to tax the runner on the Aonach Eagach – a largely horizontal ridge that is classed as a scramble, not a climb. But the exposure…

The words of the race blurb seemed to murmur in the breeze: ‘Be under no illusions that a slip or trip on these serious sections of the route could result in death.’ I could not see what was below, but I knew: wickedly-angled faces of grass and cliffs. There is reputed to be no safe line of descent to the south, even if descent was made willingly. There is no escape. Grant Macdonald, a competitor in the first Skyline race in 2015 was not being sarcastic when he summed up the significance of reaching the end of the Aonach Eagach: ‘This marks the point when you know you aren’t going home in a helicopter.’

As I progressed along the ridge, desperately clinging to wet rock, dangling cramping legs, and hoping, Jonathan Albon was back in Kinlochleven, winning the 2016 edition of the Glen Coe Skyline. It would be three hours before I reached where he was just then. Albon’s exploits belonged in this otherworldly place; his run, a little over six-and-a-half hours, resembled something fantastical. There was a sublime horror to it all. The words of David Brown, a hill runner who I interviewed for The Mountains are Calling at the end of the Greenmantle Dash, seemed fitting: ‘Best-thing-worst-thing I’ve ever done.’ 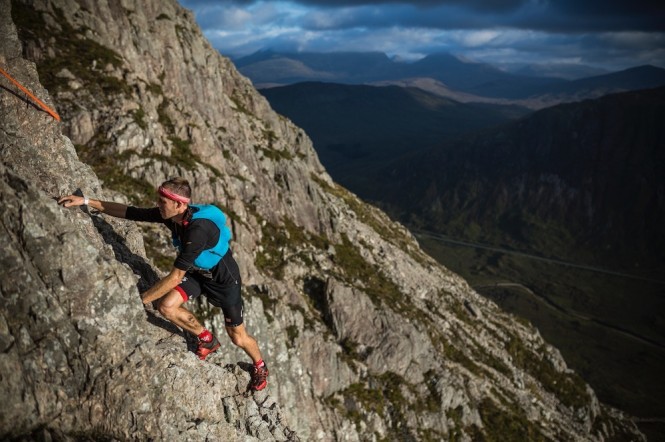 Unashamedly, the Glen Coe Skyline is different: Salomon is the name on the branding; the entire course is marked; a ‘highly-credible, rich experience’ event comes at a cost; there is definitely no entry on the day. Preparing for its fourth year in 2018, the Glen Coe Skyline – and its three sister races – seem established, however, as if they have always been part of the Scottish calendar. In particular, the Glen Coe Skyline has become a race like no other in Scotland, attracting some of the world’s best mountain runners to the Highlands. It is, after all, hard to resist such beautiful madness.

For all the differences, what actually matters is the same. When Dennisbell McGregor of Ballochbuie won the world’s first hill race in I064, he seemed to be literally racing for his life. He climbed steeply, clambering over heather and rock, compelled to go higher, determined to touch the sky. He would have looked up and seen what we see today: mountain, ridge, moor, burn, loch, wildness. Everything has changed and nothing has changed. Whether you are Kilian Jornet racing over the Aonach Eagach, or a gnarled veteran battling to be the first in his or her age category, or a lone silhouette on a high ridge, there is something of McGregor in us all – that insatiable desire to answer the call of the mountains. 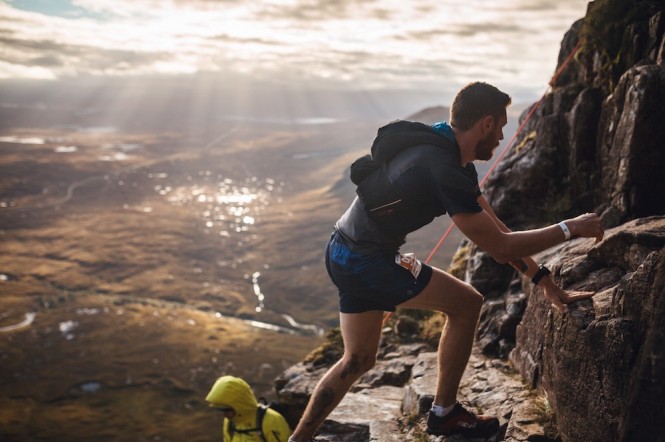 The mountains are calling - but just those who have passed vetting for the flagship Skyline Scotland race; the Salomon Glen Coe Skyline ©Guillem Casanova

The last entries are calling... for the 2018 Salomon Glen Coe Skyline

The Mountains are Calling: running in the high places of Scotland, was published by Sandstone Press on May 17, 2018. Find out how to get your copy. 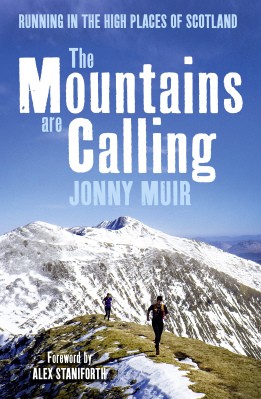