Kilian Jornet and Tove Alexandersson took gold for Spain and Sweden in the final race of the 2018 Skyrunning World Championships today. Both athletes smashed the course records for the 29km Salomon Ring of Steall Skyrace. 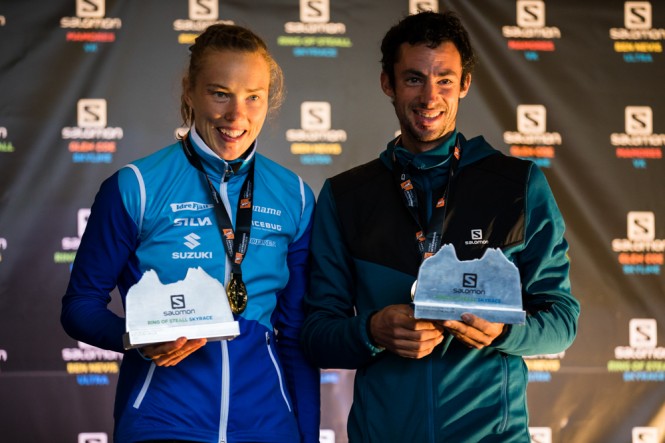 More than 700 runners headed to the Scottish Highlands to take on the technical Skyrace, which includes four Munro summits (Scottish mountains over 3,000ft / 914m) and 2500m of ascent.

The weather was the best of the Skyrunning festival weekend, with little wind and a mix of sunny spells, cloud and rain, although many athletes described it as "atmospheric" on the summits.

Posted by Salomon Ring of Steall Skyrace on Saturday, 15 September 2018

It is the first time Scotland has hosted the biennial Skyrunning World Championships. The Salomon Ring of Steall Skyrace is the fifth race in the new Golden Trail Series. 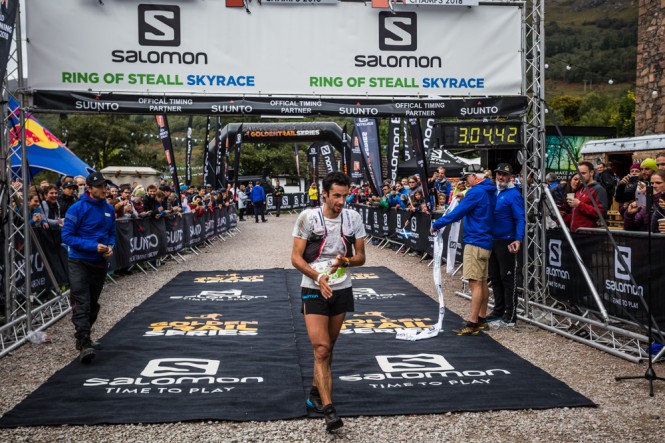 Kilian, 30, beat a strong international field to come home in 03:04:34, an incredible 20 minutes faster than the record set last year. The Salomon athlete, who had a bloodied chin after falling on the final descent, said: “It was an amazing race and I am very happy to be the winner.

"I love coming to Scotland. It’s technical, the track is beautiful, what I love when I’m racing.

"Today was a great battle with Nadir [second placed male]. It’s great because when we look for racing, we look for competition, for a fight, and that’s what it was today. When you think about skyrunning you think about races like this, you need to fight every step.

“What’s particular here is it’s very muddy, very wet, slippery. The terrain is similar to Norway. I fell in the mud on the last downhill. This year it was good for me, such a good field with so many strong people.” 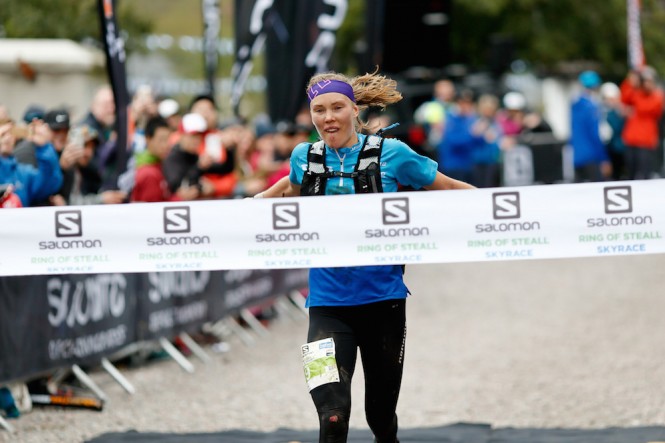 Tove triumphs in only her second Skyrace. Credit: Sven Alexandersson

In only her second Skyrace, 26-year-old Tove finished almost 19 minutes ahead of the record in 03:46:28. Tove won her debut Skyrace, the Limone Skyrunning Xtreme last October and is a seven-times orienteering world champion.

Looking fresh and relaxed at the finish, she said: “I did not have a big expectation of this race because I am new to sky races but it was a nice day for me. It was a fantastic course and it feels amazing to be world champion.

"I want to say thank you for skyrunning." 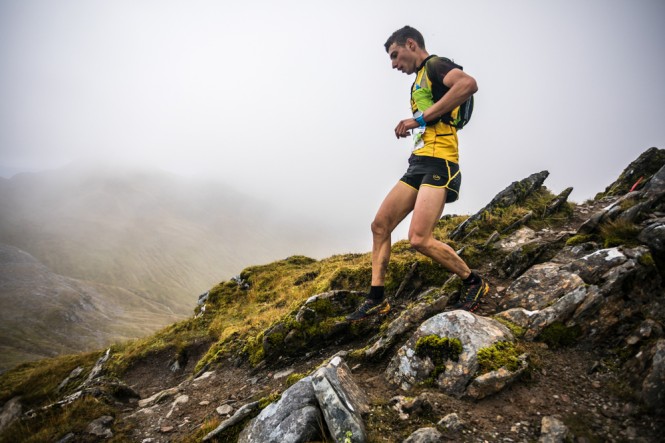 In silver position overall and 91 seconds behind Kilian, was Italian runner Nadir Maguet in 03:06:05. He was followed by Stian Angermund-Vik, of Norway, in 03:09:05.

Nadir, 24, said: “I came here hoping to do well. Obviously when you see a start list with a very high level, you ask yourself how will it go?

“My dream was to race with Kilian, to feel strong, and that was how it went, running with him.

“I ran the whole race with him, mostly half a minute behind. In the second half of the race and on the last descent I tried to push but you know Kilian is strong on the downhill. It was impossible to catch him, I tried.

“The important [thing] is to dream and dream and I’m really happy for my second place.” 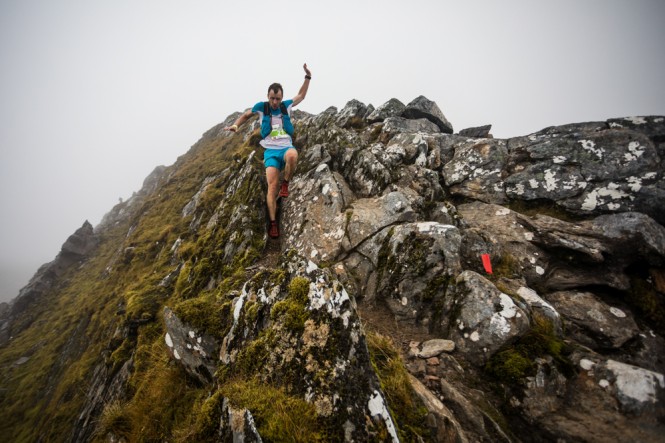 He said: “It was so much fun and I am so happy. I couldn’t keep up with those fast guys but I am just so pleased to be 15 minutes faster than last year.

“This is my favourite race. I love Scotland’s mountains.” 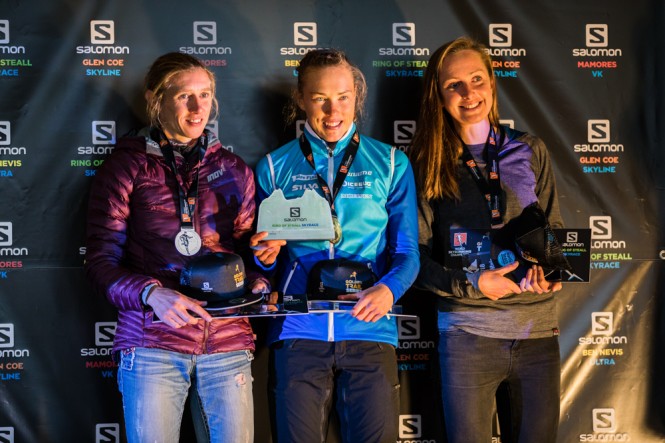 Top 3 females on the podium. Credit: No Limits Photography.

A fortnight ago Victoria, 40, made Scottish running history setting a new women’s record for the iconic race up and down the UK’s highest mountain, Ben Nevis.

The English fell running champion and inov-8 ambassador said: “The Salomon Ring of Steall Skyrace was hard work because I have not raced for four hours for quite some time and that meant I had to pace myself.

“I had not run the Ring of Steall course before either but I loved the course and I am really happy to be second lady.”

Holly Page, who is in pole position in the Migu Run Skyrunner® World Series Classic category, had hoped for a top 10 finish and was understandably emotional to come home third.

The 28-year-old Salomon athlete said: “I am absolutely delighted to win bronze. I wasn’t expecting it at all because the field is so strong here today.

“At the top of the first climb I felt bad and I was unhappy but then on the downhill the race ‘smelt’ like a fell race, which I am used to. Then I felt much better. I overtook many people and surprisingly I was not overtaken heading up the second climb. It was a great race." 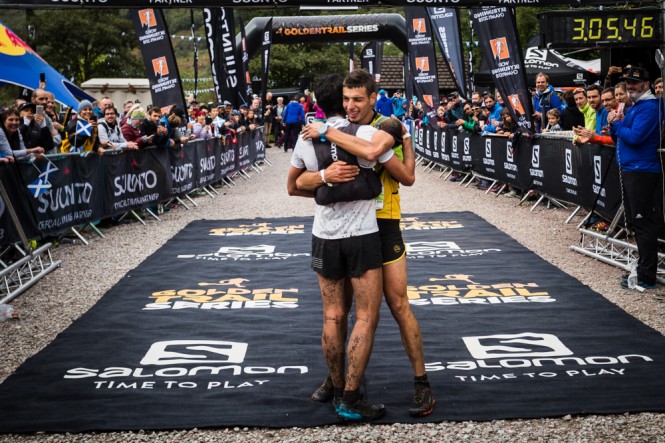 The first two males hug on the finish line. Credit: No Limits Photography

The Salomon Ring of Steall Skyrace was the fifth and final race of the Golden Trail Series and represented the last chance for many athletes to grab a spot inside the top 10. They qualified for all-expenses paid trip to the Grand Finale in South Africa. That left plenty of drama to unfold on the hills of Scotland, especially in the women’s field. 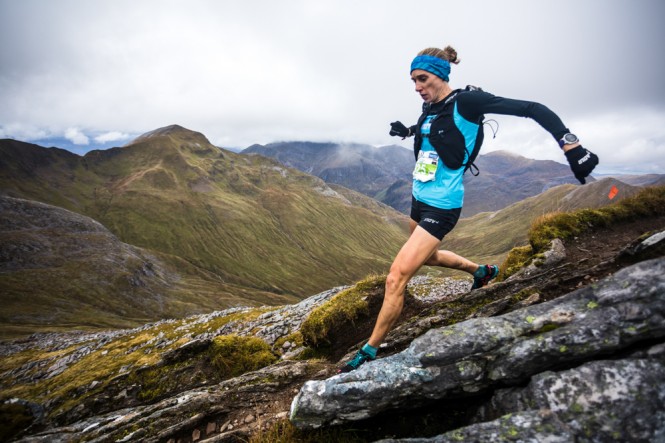 What’s next at Skyline Scotland?