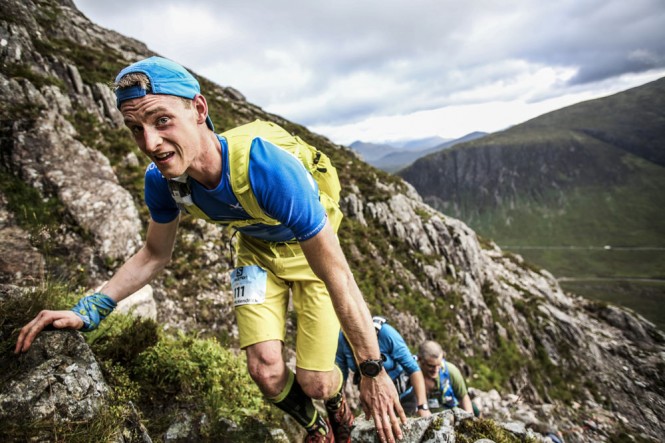 For the Mamores Vertical Kilometre® we have now chosen the best mountain from a choice of several nearby Munros in the Mamores, Na Gruagaichean. It's the mountain that you will most easily point-to-with-awe from our Kinlochleven Event Centre, that a supporter-with-binoculars will conceivably be able to follow runners up the whole open mountain ascent, and that provides the best ground for ascending. At mid-altitudes, the paths on these mountains can be indistinct, and the ground difficult to interpret. All considered, and despite Am Bodach being a fine mountain from other angles, and on the map, all eyes are now on Na Gruagaichean.

The 2016 Mamores Vertical Kilometre® will therefore summit Na Gruagaichean and not Am Bodach as previously described.

Na Gruagaichean* is the most prominent Mamores' Munro above Kinlocheven, and from our Event Centre, the road at the Startline will feel like a runway for the beginning of your kilometre of ascent up this fine mountain.

The route soon switches into a rocky path in some steep woodland, passes beside the Grey Mare’s Waterfall, and pushes up out of the trees and onto the open hillside using good narrow paths. At 330m altitude, a short section of rough vehicle track is used, and leaving this track marks the start of the mountain’s steep flank, and then to its shoulder. This route is a lesser used approach to this mountain and is impressively direct.

The clear goal is the southern promontory approach ridge called Leachd na h-Aire, and the route briefly levels after this, and passes through 900m at a shallower gradient. The summit will now be in clear sight, as will the other mighty Mamores' Munros east and west and Ben Nevis and the Grey Corries mountain range to the north, and if you were to look back, Glen Coe's (Skyline) Munros to the south. Mission accomplished!

Returning from the summit to Kinlochleven presents you with a choice. Either reverse the route that you have ascended – for many obvious and pleasant reasons, OR continue over the second lower summit of Na Gruagaichean and then descend west to the saddle and regular path into the coire below. This is a longer route, but more sheltered. This might also be the route that supporters/spectators choose to use.

*Na Gruagaichean is pronounced Na Groo-a-gee-chan and means 'The Maidens'. It has two summits, but it’s OK, we only reach the nearest and highest!