NEW for 2019! The Skyline Sessions

Hear from some Top Athletes and Local Adventure Heroes!

NEW for 2019 - FREE Q&A sessions taking place in the tent directly opposite the main entrance to the Ice Factor, starting Friday lunchtime and running all weekend.

All sessions will be hosted by Becki Vale from Into The Outside and Kendal Mountain Festival. 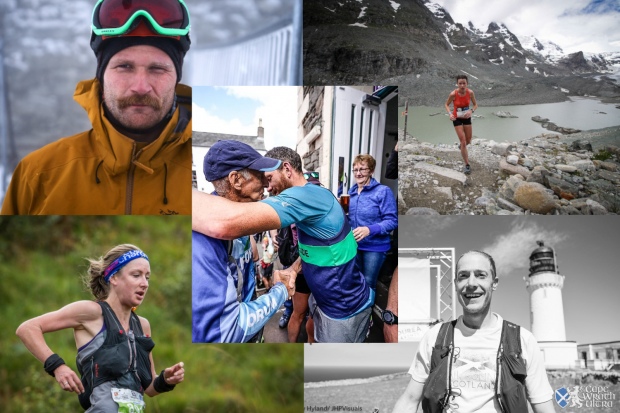 Holly won the Skyrunning World Series in 2018 and also the Grand Final of Golden Trail Series in 2018, breaking the record by 11 minutes. She finished in the Top 10 and first British runner at World Trail Champs in 2018 – in a race which at 86km was 30km further than she had ever run in her life. Originally from West Yorkshire, she is now enjoying the nomadic life, travelling lots and working remotely in International Development.

His journey into photography began capturing images of the Scottish backcountry skiing scene, however since turning professional three years ago, he has expanded into shooting climbing, fell running and basically any sports which allow him to spend as much time out in the mountains as possible.

I find the creative process of trying to produce exciting images in tough and inhospitable environments really appealing. If it’s a particularly cold or wet day, then you’re fighting the conditions trying to look after yourself and keep your camera kit working; if the best position for a shot is half way up a cliff face, then you've got to work through the logistics of getting to that position. I also love the physical challenge - being fit enough to lug lots of camera gear around and stay motivated to keep pushing the shutter button even when you’re exhausted, maybe also a little scared, and overall would probably rather be anywhere but there. I think the combination of all these aspects is what draws me to this sort of photography over anything else.

To mark the launch of his new Trail Running company in 2017, Mountaineering Instructor and mountain runner Ian Stewart needed a big Scottish trail running adventure. It had to be the Cape Wrath Ultra! The Cape Wrath Ultra® is a once in a lifetime, 8-day expedition race weaving 400km through the Highlands of Scotland.

In June this year, Paul summited every one of the 214 peaks that feature in Alfred Wainwright’s iconic, seven-volume guide to the Lakeland fells - in one go. It took him 6 days, 6 hours and 5 minutes. The Lake District resident broke Steve Birkinshaw’s record by almost seven hours and raised over £28,000 for the charity Mind, UK. 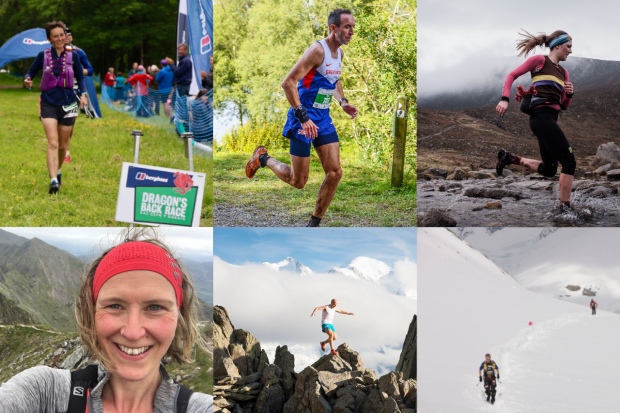 10.15am to 11am: James Elson Ultra Runner, Running Coach and Race Director

As a runner himself, James has been competing in ultras since 2005 and has been fortunate enough to race many of the better know races across the world as well as at home in the UK. He has been fortunate to have twice represented Team GB in the 24hr format. He loves racing on any surface over any distance from Track 24hrs, to Barkley, to Badwater, to Western States and the Bob Graham Round - it’s all good! In 2010, he started Centurion Running to give runners the opportunity to experience running 50 / 100 miles supported, on some of the UK's most scenic trails. Since then he has directed 60 ultras including 35 x 100 milers. He is a UKA qualified coach and works with athletes from novice through to international standard. And co-hosts the greatest podcast on the internet, the British Ultrarunning Podcast. He is supported by Petzl and La Sportiva.

Ben is a 38 year old runner from mighty Yorkshire who loves nothing more than spending time on the fells and trails. He competes for Calder Valley Fell Runners and Stainland Lions and during his career he has been lucky enough to represent Yorkshire, England and Great Britain at mountain running. Over the last 16 years, he has competed in some pretty epic races, visited some amazing countries, ran up and down some spectacular mountains, and he has trained and raced with the very best mountain runners in the world. So if you fancy a few training tips, travel advice, or just simply enjoy listening to tales of adventure (mostly amusing and self-deprecating), then this Q&A might just be of interest…

I started doing ultras about 12 years ago when I realised I couldn’t get much quicker at running, so I thought I’d try going further and discovered an aptitude for the ‘long one pace plod’. I’ve done lots of UK ultras, some 24 hour races, some of the busy Euro ultras (UTMB, Lavaredo, Transvulcania etc) and multidays like Cape Wrath Ultra and Dragon’s Back Race.

Donnie is an endurance athlete and running coach based in Scotland. He has competed in trail and mountain races all over the world and has just come back from taking part in the Tor De Geants in Italy last week (8th September) which is a 330km non stop race around valley Aosta with over 24000m ascent. He has previously won the Ben Nevis Ultra in 2017 and finished 3rd in the Mont Blanc 90km last year. Donnie has a degree in Sports Coaching and Development and coaches runners from complete beginners to elite athletes and also works for Salomon in a coaching capacity helping people get into trail running.

Es is a runner, ski-mountaineer, climber and Passivhaus designer. He’s been having adventures in the hills both near and far for the last two decades. This summer Es set himself the target of breaking the record for Ramsay’s round (Scotland’s classic 24 hour round). Expecting to either succeed by a decent margin or fail by a decent margin, Es found himself almost exactly on the split times of the previous record holder Jasmin Paris, causing a very nerve-wracking day for all involved. After just over 16 hours of running he broke the record for Ramsay’s round, but only by the smallest of margins…

Megan is a Northern Irish gal with a love for self-propelled adventures in all corners of the world. She joined the ‘dark side’ (Dark Peak Fell Runners) on moving to Sheffield a few years ago and hasn't really looked back, it’s taught her a lot about enjoying the mountains and pushing her boundaries. In summary, she enjoys running competitively but also adventurously and always happy when on two feet or wheels!

Keri Wallace is a fell runner, skyrunner, climber and writer. She is Summer Mountain Leader (SML) and Rock Climbing Instructor (RCI) qualified - and is a mother of two toddlers. Keri races her first mountain marathon in 2007 and has since gone on to win several of these events in various categories. She has been running and racing in the Scottish mountains for over a decade and lives in Glencoe. In 2010 she undertook a multi-stage solo traverse of the Bob Graham, Paddy Buckley and Charlie Ramsay Rounds for charity (over 10 days). Keri has over 5 years of Mountain Rescue experience in Glencoe. Last year she qualified for a place in the UK Skyrunning Team for the Mamores Vertical Kilometre 2018, which she completed just three days after finishing 12th in the GORE-TEX® Transalpine-Run (a 260km/16,000m multi-stage trail race crossing the Alps from Germany to Italy over 7 days). Keri has a PhD in neurobiology and works part-time as a freelance sports/adventure writer. 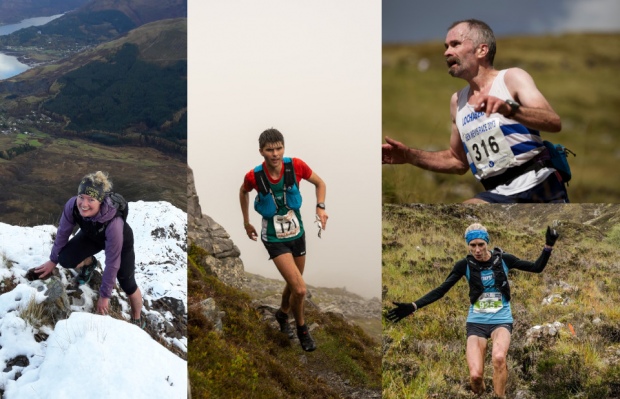 9.30am to 10.15am: Victoria Wilkinson Fell and Mountain Runner

Victoria's Dad was a fell runner and as a family they would all go the Lakes fell races, she used to help out from a young age. Age 9 she started going out for a run and then age 10 she started doing Under 12 fell races. Her 1st England vest was at age 14 at the Home International. She tried all running disciplines, cross Country, track and road and did gain GB vests in all disciplines. In 1997 she became World Junior Mountain Running Champion. In the early 2000's she turned to Cycling and raced for GB in road, mountain bike and cyclocross. Back to the mountains and fells - in 2017 after 4 times of trying she broke the 3 Peaks record. Then in 2018 she had a cracking year breaking records from 1.5 mile Burnsall Fell race to the Ben Nevis both of which had stood for 34 years. Luck has not been on her side for 2019 fracturing her foot in June.

10.30am to 11.15am: Sarah MacDonald Mountain Rescuer and Hill Runner

Sarah is born and bred in Glencoe and has lived in Lochaber all her life (apart from some spells away at uni). She has been an active member of Glencoe Mountain Rescue for 5 years and is also a registered nurse. She is from a hill running background and has raced around the UK and abroad and does some guiding for Girls on Hills. She is a mum to a 5 month old baby, so is currently balancing being being a new parent with rescue call outs and easing herself back into hill running after pregnancy!

With a background in junior orienteering, Tim now focuses on competing in hill races and mountain marathons across the country. Highlights include a win at the Isle of Jura Fell Race; winning the iconic Carnethy 5 claymore as part of the winning Edinburgh Uni team; and podiums in the Elite category at the OMM, Scottish Mountain Marathon & LAMM. Tim will chat about the value of orienteering for fell running and mountain marathons; the huge running scene in Edinburgh; and what it was like to live in a flat with Edinburgh’s biggest sword collection (probably).

1pm to 1.45pm: Charlie Ramsay Creator of Ramsay’s Round

Ramsay’s Round is a Sub 24 Hour Scottish Mountain challenge which includes the 23 Glen Nevis & Loch Treig munros in Lochaber, Scotland. It is 94km, with 8,690m of ascent, and was established in July 1978. It is now recognised as one of the big 3 UK Mountain Challenges, which includes the Bob Graham Round in the Lake District, England and the Paddy Buckley Round in Snowdonia, Wales. Charlie will talk about how he established this epic mountain challenge.

Long-term walker and climber who became a runner by accident looking for lost shape aged 40 after a decade back sailing (my first love) led to me becoming lazier, heavier and less fit! Never top class, but determined enough to record a sub-24 Ramsay’s Round and four decent West Highland Way Race finishes. Happy to talk about anything appropriate including Ramsay’s Round, the SHR pages, hill/trail running in Lochaber and why Munro baggers should really do the Tops as well!