Salty-faced from the unexpected Scottish sunshine, but otherwise looking fresh at the finish, Kilian said, “I loved the scrambling and the high, rocky ridges, it was quite like in Norway where we [he and partner Emelie] train a lot, and I was excited by all crampon-scratched rocks of the first climb up Curved Ridge – it looks good for winter climbing! Such a beautiful course in amazing, high mountains, I would like to come back next year.”

In the words of Kilian Jornet, ‘What a cool race! Glencoe Skyline is absolutely one (the one) to do!” ©  Guillem Casanova

Beaming and muddy-legged as he crossed the finish line in second place, 2016 course record holder Jon Albon (UK) beat his 6:33 record, created in wet, slippery conditions last year. Second place won him the Skyrunning World Series 2017 championship but it wasn’t enough to hold off the 29 year old ski mountaineering and trail running star from Catalonia, who cruised easily along the dry, skinny mountain ridges to new record of 6:25. 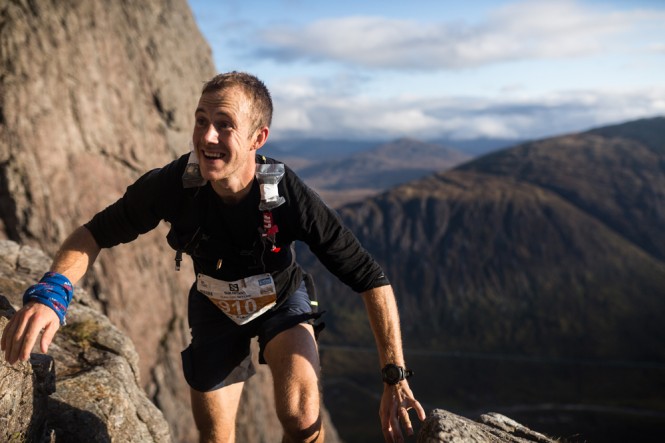 Third place went to Scott athlete Alexis Sevennéc (France) in 6:40 who has gone from top 10 to podium finishes over the past few years. “The three of us were running together, having a laugh and a chat until the final climb up to the Aonach Eagach ridge,” said Jon, a 28 year old mountain runner and obstacle racing Brit who lives in Norway. “As we left CP11 at the road, the race was on and Kilian was off,” he said. “I almost caught up with him on the ridge but I made a bit of a racket and when he heard me he was off like a shot again! I’m happy, I just needed to be 2nd today to secure my Skyrunning World Series championship title from Nepalese runner Bhim Gurung [4th place].” 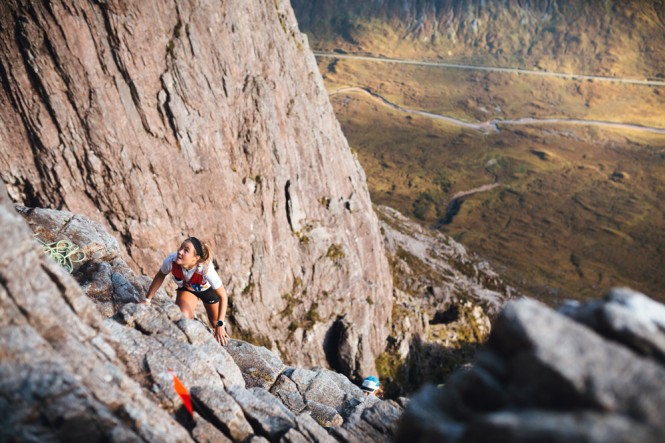 Emelie Forsberg looks up, and yes, the route really does go up there! The Salomon Glen Coe Skyline has really challenged everyones perception of what can be done in a mountain running race. © Guillem Casanova

A stella, international ladies line up made for nail-biting watching on the trackers, with uncertainty over previous Skyrunning World Ultra champion Emelie Forsberg’s knee. Speaking before the race the 30 year old said, “This is the longest I’ve run since surgery after my skiing accident last year so I’m hoping everything will go well tomorrow.”

Hot on Emelie’s heels through the road CP11 before the final climb up Aonach Egach, Megan Kimmel from the USA looked like she might catch up on the ridge, but Emelie came flying through the finish in a new course record of 7:53, a full 22mins faster than the UK’s Jasmin Paris in rainy, greasy conditions last year.

“The Scottish mountains are just so beautiful,” smiled Emelie at the packed out finish at the Ice Factor, Kinlochleven. “I loved this race two years ago, and it was great again today with the scrambling and the views.” Megan posted 8:14, also just under Jasmin’s record. She said, “It was a lot of fun, quite muddy but it could have been a lot worse! I give the race 9 or even 10 out of 10.”

Emelie Forsberg and Kilian Jornet. Winners of perhaps the most technical and prestigious mountain running race in the World. © Guillem Casanova

Incredibly, 3rd lady was from the famously flat Netherlands – Ragna Debats in 8:22. “I started trail running when I moved to Spain,” she told the cow-bell clanging crowds at the finish line. “And I did a lot of horse riding and you have to have very strong legs for that.”

A total of 265 runners signed up for the Glen Coe Skyline, of which 35 were female.