Festival atmosphere as Event Village buzzes with runners and spectators

Runners and spectators enjoyed a lively atmosphere in the Event Village of the UK's biggest weekend of trail running and skyrunning.

While the focus of Salomon Skyline Scotland® is the chance to compete in seven unique races in the Scottish Highlands, there were also plenty of off-trail activities, attractions and entertainment on offer at the race base in Kinlochleven.

Queues formed at popular food and drink outlets, with Coffee Rescue Scotland, Turnip the Beet, Top Out Brewery and the Ice Factor cafe and the outside bar busy during both days. 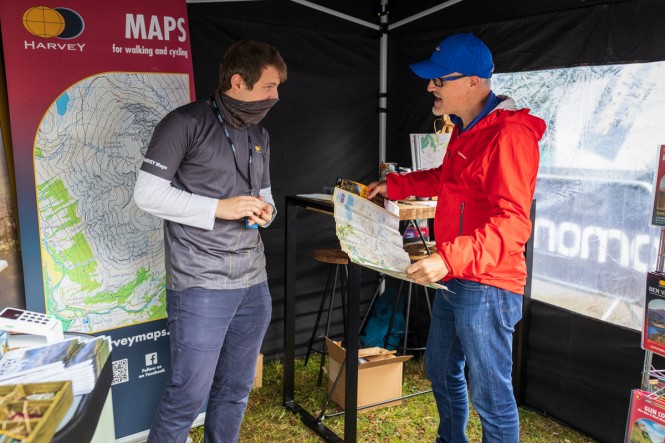 Harvey Maps in the Event Village. © No Limits Photography 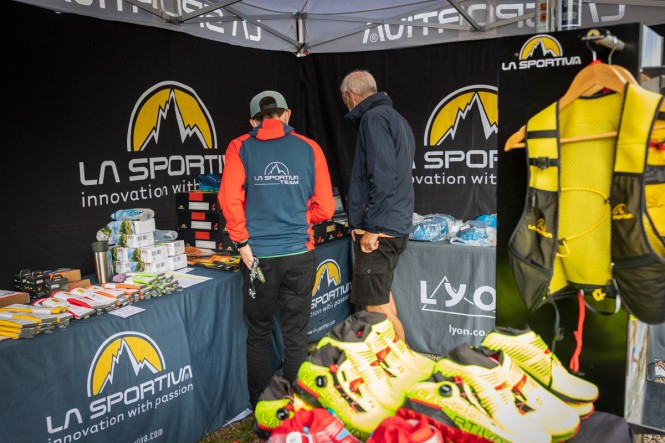 ​Runners and spectators find out about La Sportiva products. © No Limits Photography

Many people also took the opportunity to chat to brand representatives, including Salomon, La Sportiva and Petzl. The outdoors companies had brought with them a range of their latest products and a wealth of information for athletes.

James, from Salomon, talked about the benefits of being the headline sponsor of Salomon Skyline Scotland®. He said: “Glencoe and Fort William are the outdoors centre of Scotland, and arguably the UK, too.

“Being part of an event like this is great and it has a real community atmosphere. It allows us to engage with like-minded people and see some really good racing as well.

“We are enjoying the opportunity to showcase some of out amazing products.”

At the La Sportiva stall, John Samways, head of sales and marketing, explained why the event was a great opportunity for the brand. He said: “We are a mountain brand and our products, especially our footwear, are ideal for the races here this weekend.

“It’s a good place to show runners our products, what innovations we have coming – and to listen to feedback.

“We have found the weekend has been a great way to engage with the runners and the race community.”

Jon Morgan, of Petzl, believes Salomon Skyline Scotland is one of the best showcase events for trail running in the UK. He added: “There is no other race like it. The crowds, the technical courses and the location are great.

“And because Petzl is a mountaineering brand, it’s great to be able converse with runners about going out in winter and the benefits of our products, such as mountaineering equipment and lighting.” 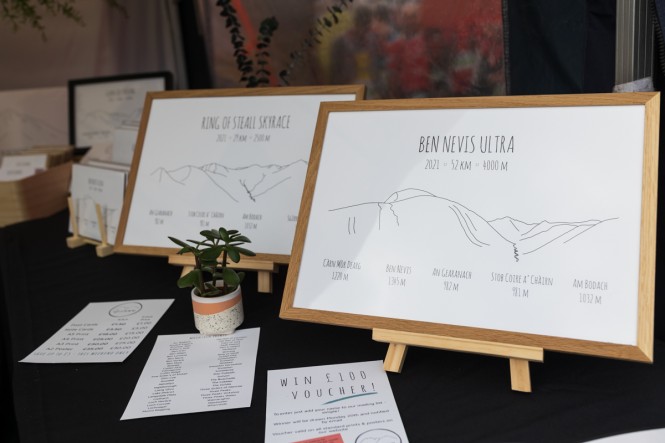 A Line in the Sky sells their unique prints. © No Limits Photography

Graphic art company,  A Line in the Sky, occupying another stall in the Event Village was delighted by the interest in their simple but very attractive mountain drawings. Founder Becca Rankine and her sister Anna Travis were busy all weekend. Becca said: “The most popular print has definitely been The Ring of Steall so far.”

Top Out Brewery supplied a special Skyline Scotland pale ale. Every sale of a can or pint sees 5p going to Scottish Mountain Rescue. Connor, from Top Out, said: “We have been supporting SMR for more than a year.

“In addition, all labels are printed on 100% recycled paper. A lot of labels in the industry are printed on a plastic backer and they can’t be recycled.”

The name of the Top Out Brewery is closely connected to the outdoors scene. Topping out is a climbing term for successfully finishing a route or reaching the top of a climb.

Andy, also from Top Out, said: “Skyline Scotland is the good event for us to attend and it is a great way to  spread the word about our beers and also our connection with the outdoors.”

Laura, from Turnip the Beet, said: "It has been an amazing weekend. It is our first time here and we want to come back. We have really enjoyed the atmosphere and we have been very busy. It has been buzzing." 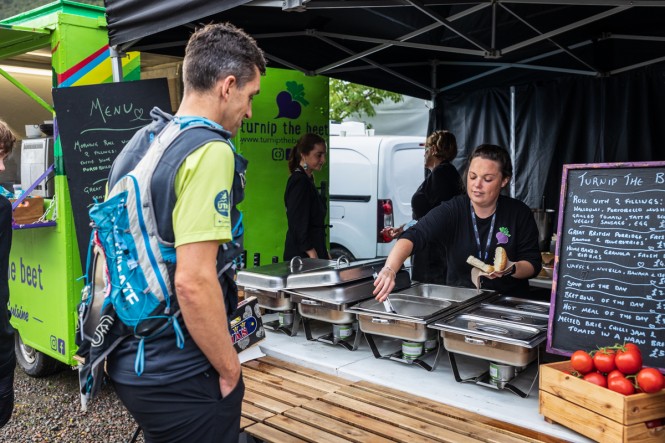 Turnip the beet had a great weekend of sales. © No Limits Photography 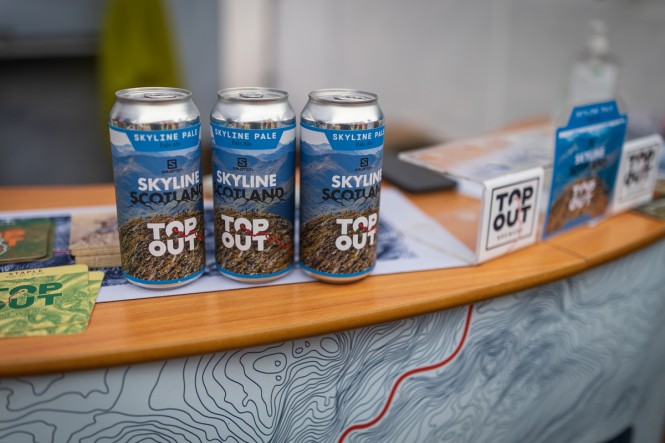 ​A special Top Out Brewery beer for Salomon Skyline Scotland. © No Limits Photography

Harvey Maps occupied another tent in the event village. The company has been creating customised maps for Ourea Events since 2015.  Cartographer Lewis Taylor said: “We have supplied about 4000 maps for this weekend.

“We make maps that are super clear and easy to read when you are on the run. We customise them for the race organisers and highlight the routes, as well as adding lots of information, such as check points.

“Our maps are tough, light and waterproof, which makes them perfect for the races this weekend.”

Another tent was home to the John Muir Trust, where visitors could discover the work of the organisation that looks after Ben Nevis and the surrounding glen. The UK’s tallest mountain features in the Salomon Ben Nevis Ultra™.

Ross Brannigan, engagement officer for JMT, said: “We have been caring for the mountain for 21 years. Our work is focused on visitor engagement, which includes footpath repair work and litter picking.

“Also in the glen, we look after the Site of Special Scientific Interest (SSSI) that constitutes an Atlantic rainforest with rare plants.

“Being here at the weekend event allows us to raise awareness – and hopefully money – so we can continue looking after Ben Nevis and the glen.

“People can support us by donating money, signing up to our newsletter or signing up as JMT members.

“We don’t receive public money for looking after Ben Nevis and we hope the people running in the race this weekend will give something back and help our work."

Other important partners for Ourea Events are Jahama Highland Estates. A new agreement focuses on long-term sustainability and cooperation between the estate and the mountain running event.

The National Trust for Scotland cares for a large Glen Coe area, including eight Munros and the wildlife that lives there, including red deer, wild mountain goats and golden eagles.

The NTS is keen for people to support their Hug of Heather campaign. Buying a Hug of Heather helps to protect an important piece of Glencoe’s history.

You can support the NTS and help the organisation to restore hundreds of miles of footpaths. A Footpath Fund helps them to look after the paths. 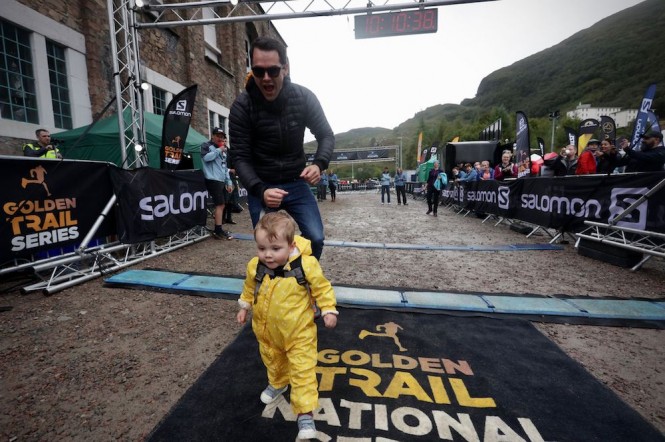 A fun run for kids © No Limits Photography Louis the piper. © No Limits Photography Yoga was included in a busy Event Village programme of free activities. No Limits Photography

All this – and more

The Event Village was also the place for a busy programme of free talks in the form of the Skyline Sessions, live music from ceilidh band Cask Strength, plus prize ceremonies, live commentary and race updates on a big screen TV. Louis was the event piper and in attendance at the finish line and at the handing out of the prizes.

Juliette Linford, a competitor in the Salomon Ring of Steall Skyrace, summed up the buzz in the Event Village. She said: “It’s a great atmosphere and there is a lot going on.

“It’s great that everyone cheers in the race finishers, even those who are further back in each race.

“I have enjoyed the live music and the outside bar. There is a lot to see in the Event Village, too. It is a great Event Village this year.”