The 42km race is the highest in altitude on the Golden Trail World Series and this 64th edition was the fifth race of the 2019 Golden Trail World Series. The race begins and ends in Manitou Springs, Colorado and climbs 2,382 meters to an elevation of 4,302 meters (14,115 feet) to the top of the famed Pikes Peak. The idea of the race is simple in theory: run to the top, then run back down. On warm days like Sunday, when the temperature reached 32 degrees C (90 degrees F), that task becomes even more difficult. 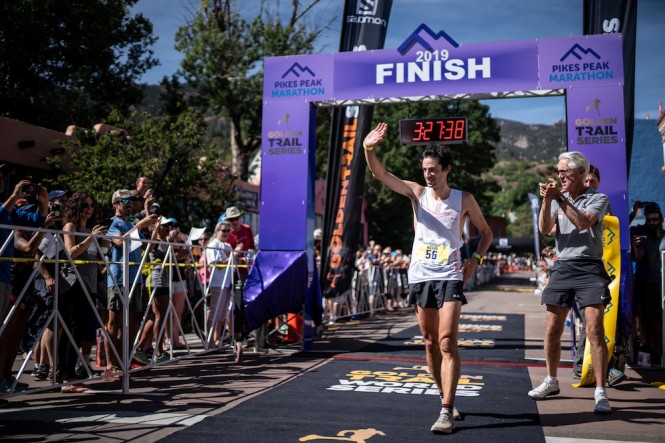 Both Kilian and Maude did it alone for much of the day. By the time he had left the road out of Manitou Springs after a mile or so, Kilian was a few seconds clear of his closest challengers and would not be seen again until he ran by them on his way back down to town. Maude, too, had established a clear gap just a couple of miles into the race and summited Pikes Peak nearly 26 minutes faster than eventual 2nd place finisher Yngvild Kaspersen (Team Adidas Terrex).

Leading up to the race, much had been made of Kilian’s potential to better Matt Carpenter’s 1993 course record time of 3:16:39, but the Spaniard repeated again on Sunday that Carpenter’s time will be very difficult one to top.

“I think what Matt did here was something very special,” Kilian said after his win. “I knew what the record was and how difficult it would be to beat. I have been training very well and I wanted to do my best time possible. My legs felt a bit tired early in the race and I was alone from the beginning so for sure that makes it a bit harder to keep a pace, but I’m happy with the way I raced.”

Colorado resident and Team Hoka One One athlete Sage Canaday finished 2nd with an impressive performance in his home state. He was 6:16 behind Kilian at the summit and held off Switzerland’s Marc Lauenstein (Team Salomon) for the runner-up spot. Sage would finish 3:39:02 and Marc, a former winner of Pikes Peak, finished in 3:40:28. Spain’s Aritz Egea (Team Salomon) was 4th and American David Sinclair (Team Salomon) was 5th. 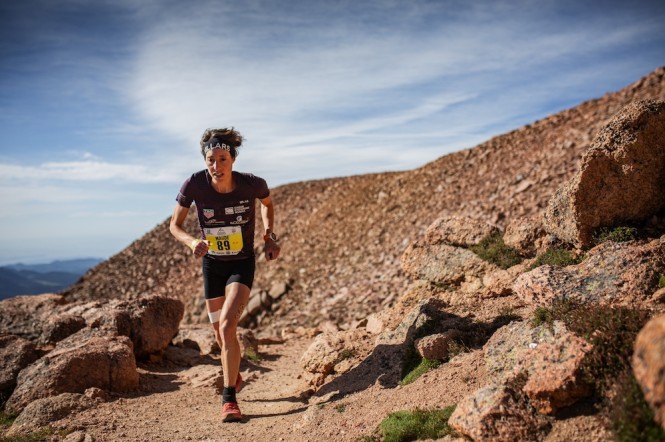 In the women’s race, Maude came in to Pikes Peak fresh off a record-breaking win at the 31km Sierre-Zinal race in her home country of Switzerland two weeks earlier. On Sunday, she added another iconic course record to her résumé. Her winning time of 4:02:45 bettered Megan Kimmel’s record-breaking time of 4:15:04 (set just a year ago) by more than 12 minutes.

“I looked at my watch when I came to the summit and when I saw the time, I said, ‘Wow!’” Maude said. “So I just tried to focus on the downhill. I had a good fall on the way down, but I recovered ok and I knew I had some time to get there in time to break the record. Even in Europe everyone knows about Pikes Peak and I love the idea of this race. You start in the town and you run to the top of the mountain and come back down. It’s simple, but not so simple.”

Yngvild finished 2nd in 4:27:26 and was followed by South Africa’s Meg Mackenzie (Team Salomon) who ran a great race to finish 3rd in 4:32:19. France’s Amandine Ferrato (Team Hoka One One) and Spain’s Eli Gordon (Team Salomon) rounded out the top-5.

The next stop of the Golden Trail World Series is in Scotland at the Ring of Steall on September 21st, where racers will have one last chance to land in the top-10 of the season long series and earn a trip to the Grand Final in Nepal in October. With a tightly bunched standings after five races, there will be plenty to battle for in the Scottish Highlands.

ABOUT THE GOLDEN TRAIL SERIES

Photos of the race