It’s 0730 on the morning of Saturday 22nd August. The leading runners are approaching the foot of Curved Ridge and I am reasonably relaxed, tucking into my breakfast at race HQ, whilst listening to the concise chatter on the radios from the event team.

It is the start of the inaugural Salomon Glen Coe Skyline™ race and the last 9 months have been packed with preparations, detailed planning, risk assessments, site visits, method statements, expert opinions and so much more. This race is arguably one of the most technically challenging mountain races in the world; fusing serious mountain terrain, ultra running distances and classic –albeit easy – rock climbing. Clearly, there is an inherent risk in an activity like this, especially when the goal is to go as fast as possible. 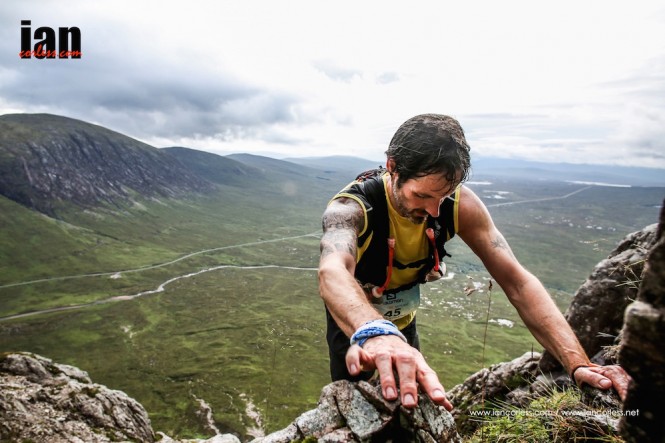 Above: James Crozier high on Curved Ridge who went on to finish the course in 11:07:09 and place 60th overall. Fantastic! © Ian Corless

So, after sending almost 150 runners off on this world-class course, how come I am so relaxed? Because I have plans for almost everything and my plans have been critiqued by the right kind of experts. Because I am supported by an incredible team of volunteers and most of the UK’s leading adventure sport event experts. More than anything, because the entries are restricted to carefully selected competitors, allowing me to predict, with a fair degree of accuracy, their skill and experience levels.

The radios remain largely silent and then the good news: the leading runners have summited Stob Dearg, via the Curved Ridge after running 10.6km (with 806m of ascent) in just over an hour. Most people, even experienced mountaineers, simply cannot comprehend the level of fitness and skill that allows such incredible speed over seriously challenging terrain. The lead competitor is just 2 minutes off my estimated schedule.

The hard work for me as the Race Director has been in the months of preparation.  Now the race is largely in the hands of the 50 strong event team. The event team is everything and I am convinced that by surrounding myself by good people, that good things will happen. While the majority of the event team are regular and dedicated volunteers, for this particular race the team is bolstered by a small number of highly experienced event experts and professional climbing and mountaineering instructors. 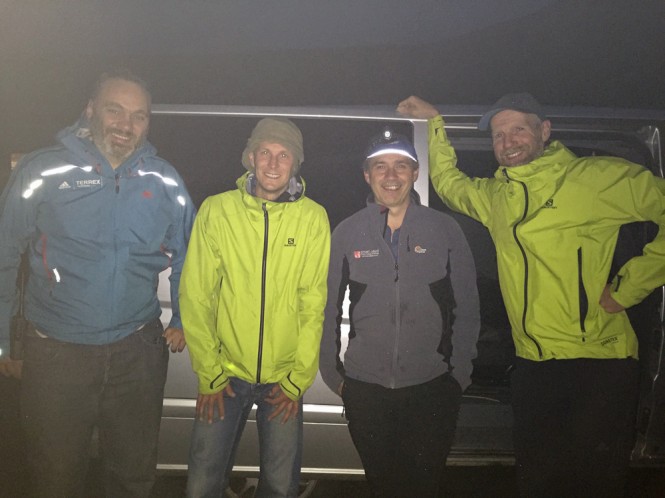 It's a wrap! All the competitors safely back at Glencoe Mountain Resort and the senior event team relax. From left to right: James Thurlow (Open Tracking), Shane Ohly (Ourea Events), Martin Stone (SPORTident) and Gary Tompsett.

Foremost amongst them, and my 2IC, is Gary Tompsett, who many (including me) consider to be the foremost adventure sport event designer in the UK. He is the Course Planner, and has been instrumental in bringing my initial race concept to life and securing the necessary consents for it to go ahead.

We are supported by Martin Stone from SPORTident. He is also the organiser of the Lowe Alpine Mountain Marathon and many other prestigious events from years past. Martin is looking after race timing, safety monitoring (private data feed) and live event monitoring (public data feed), which fires live data back to HQ and onto the website results page as competitors pass through each checkpoint.

James Thurlow from Open Tracking is managing the GPS trackers. As with the SPORTident system, we have both a public and private data feed and with every competitor and all the event team being tracked, a wealth of data is updated every minute. James is also Race Director for Open Adventure events, who create sportives and the UK’s best adventure races. James’ LCD TV screens, which displayed the live data at the finish and Checkpoint 10, were a huge success and added much spectator interest to the event.

Stewart Caithness was coordinating all radio communications and brings his huge experience working as Race Director for Rat Race Adventure Sports and Scottish Athletics to the mix. Gary, Stewart and I have all worked for Rat Race in varying event design and delivery roles over the years. My two most regular course planners, Charlie Sproson and Dave Taylor are deeply involved in the way-marking process and all of us are supported by a simply awesome event team in which everyone has a role, everyone brings something to the party and everyone does a superb job. The course was waymarked by this team, the checkpoints were manned by many of the same team the next day, and with all the waymarking extracted by them immediately after. A clean sweep!

The event team consisted of:

There is already a race report on the event website HERE so I won’t rehash the details of that report apart from adding how impressed I was by the performance of all the competitors and it was great to be there on the finishing line to welcome home almost everyone. I only missed a few runners as we presented the podium prizes in the Glencoe Mountain Resort cafe. 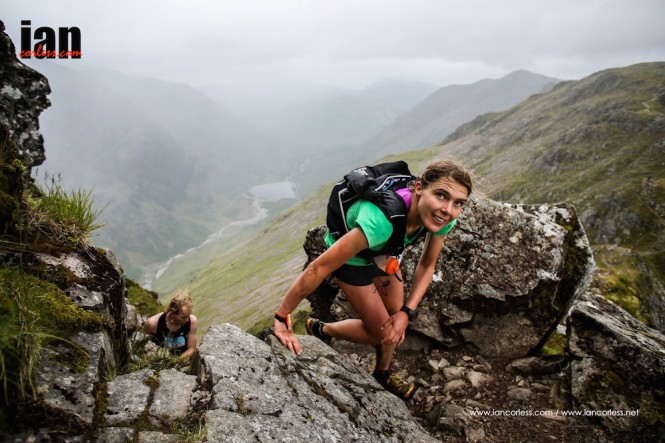 Joe Symonds and Emelie Forsberg were deserved winners but with 24-hours reflection since the race, I feel that other stand out results for me are Jasmin Paris’ 5th overall (2nd women) and the youthful Tim Gomersall one place behind in 6th.

I do want to raise a couple of minor safety points. I won’t name names but you know who you are!

In the weeks before the event we started to attract sensational press interest as the national media caught hold of the ‘Glen Coe Death Race’ story. Half a dozen national news outlets (newspaper, websites and radio) ran stories and I suddenly found myself, and the race, under considerable external scrutiny.

I felt then and now, that it was unfortunate that these commentators decided to adopt an entirely negative approach to reporting on the event. I can accept this sensationalism from an ill-informed mainstream media, but I have been disappointed by some of the reporting from specialist outdoor media. The headline for me has always been the world-class sporting event showcasing some of Scotland’s finest mountains, which also attracted an incredible world-class field of talented athletes.

What has been interesting to sense from some quarters is almost a desire for a serious accident to occur, so that they could be justified in their initial hostility towards the event. I even got a call at 11pm on Saturday night from one newspaper just to double check there hadn’t been any incidents. Even if there had been a serious incident, I am confident that it would have been handled with efficiency by our in-house rescue/medical team with support from local emergency services if required.

At the end of the day, the event has spoken for itself, and it was a highly successful day of racing for all involved. 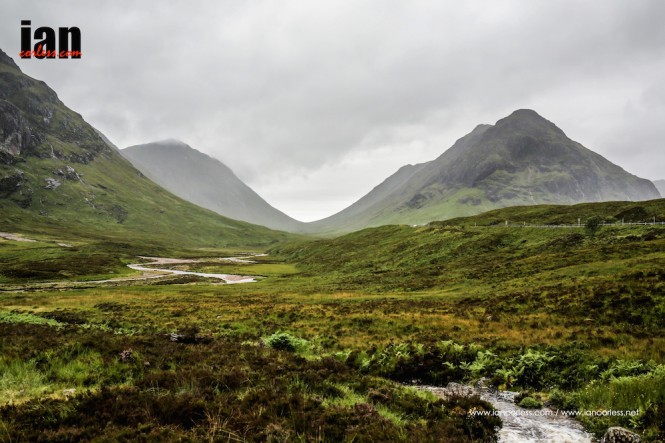 Glen Coe. "The headline for me has always been the world-class sporting event showcasing some of Scotland’s finest mountains" © Ian Corless

The Salomon Glen Coe Skyline™ was only possible thanks to some important support. Chief amongst these was Salomon and the National Trust for Scotland. Salomon committed to supporting the event at the beginning of 2015 and whilst the race may have “exceeded expectations” (see report on UKHillwalking HERE), Salomon also exceeded my expectations as a race partner.

The National Trust for Scotland also need special praise because they listened carefully to our initial proposal, asked the right questions and once they had agreed in principle to the race, stayed steady and supportive despite some strong criticism from some corners of the mountaineering and walking establishment in the national press. Thank you.

I have already singled out Open Tracking and SPORTident. These two companies really are the best in the game and James Thurlow and Martin Stone really added significantly to the interaction and safety management of the event.

Many competitors may have been unware but there were two fixed wing light aircraft patrolling Glen Coe during much of the race. This was Skywatch who were on hand to provide communication relays into possible VHF radio shadows and also to provide visual oversight into the known GPS tracking blackspots. They added another layer of safety monitoring to the event.

Glencoe Mountain Resort were our hosts for the weekend and provided all the food for the event team and the finishers meals. Thank you for having us!

Finally Ian Corless from Skyrunning UK has been instrumental in firstly encouraging me to organise a Skyrace and then in providing fantastic media support to the event. I think everyone will agree that his images have once again captured the soul of the race.

The Salomon Glen Coe Skyline™ is part of the 2015 Skyrunning UK National Series, which Ian is the driving force behind. This series includes: 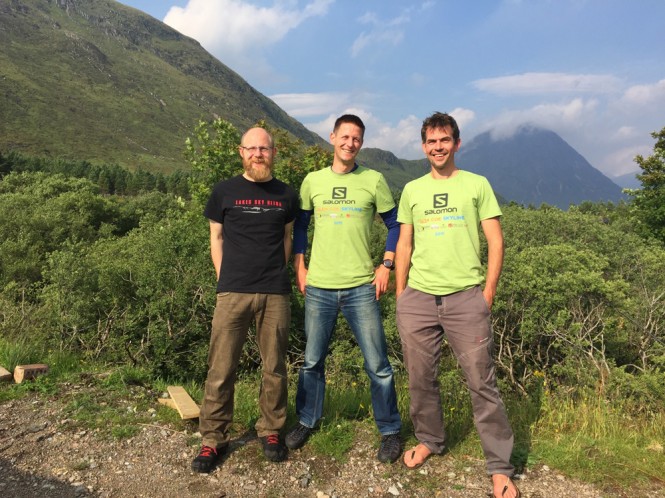 Above: With Buachaille Etive Mor in the background, from left to right: Andrew Burton, Shane Ohly and Charlie Sproson

The next race is the Lakes Sky Ultra organised jointly by Charlie Sproson and Andrew Burton. Both were working at the Salomon Glen Coe Skyline™ and I know they have put a huge amount of energy and effort into their race and I’d like to wish them every success.

Thanks to everyone involved in the Salomon Glen Coe Skyline™ and see you in 2016. 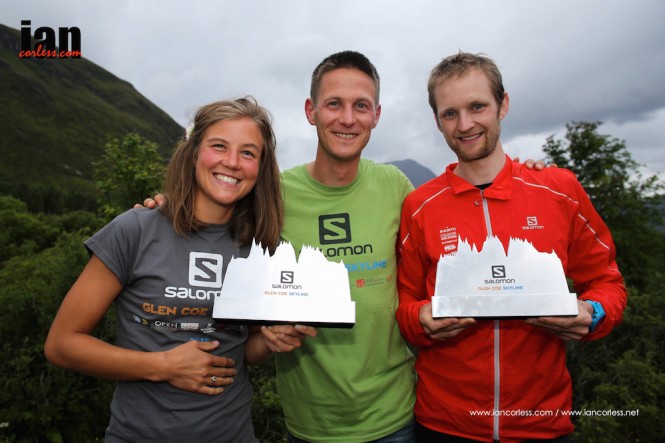