ZINAL, SWITZERLAND – Sierre-Zinal is a legendary trail race because of it's near five decades of history and revered athletic performances, and on Sunday along it's famed trails in the Swiss Alps another trail running legend added yet another chapter to both his own storied legacy and the race’s as well. Setting out with a blazing fast pace, Spain’s Kilian Jornet (Team Salomon) ran away from one of the most competitive trail running fields in recent memory to win in 2:25:35, shattering Jonathan Wyatt’s longstanding course record of 2:29:12 by three minutes and 37 seconds. It was Jornet’s seventh win at Sierre-Zinal in nine tries. 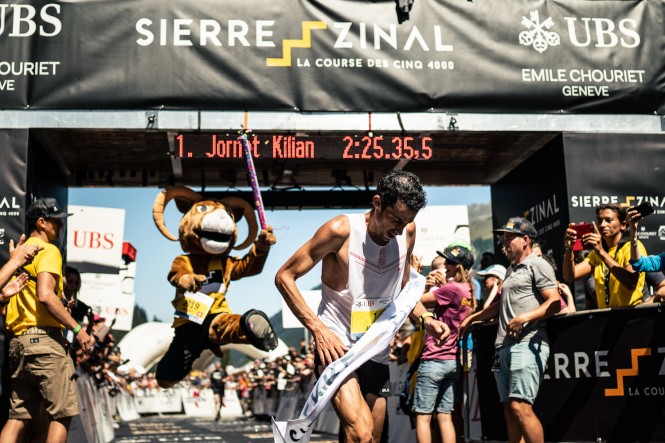 On the women’s side, Switzerland’s Maude Mathys (Team Salomon) also broke the Sierre-Zinal course record, winning in 2:49:20 to beat Anna Pichrtova’s 2008 time by nearly five minutes. Both Jornet and Mathys won from the front, surging to the lead on the challenging early uphill.

As part of the second season of the Golden Trail World Series, Sierre-Zinal had another deep, talented field. That seemed to bring the best out of the athletes taking to the starting line at the fourth stop of the six-race Series.

Jornet was chased valiantly by 2016 winner Petro Mamu from Eritrea, who also broke the former course record, finishing just 56 seconds behind the Spaniard in 2:26:31. American runner Jim Walmsley (Team Hoka), competing for the first time at Sierre-Zinal, was 3rd in an impressive 2:31:52. Juan Carlos Carera was 4th in 2:32:52 and Great Britain’s Robbie Simpson was 5th in 2:33:55.

Jornet grabbed the lead a few strides into the race and was alone from there on out. The course gains 2,200 meters from the start in Sierre to the finish line in the idyllic alpine village of Zinal, rolling along before a big downhill finish. Jornet wasted no time letting the competition know he was going for broke. At the Chandolin checkpoint he was ahead of Mamu by two minutes and in hot pursuit of the course record set by Wyatt in 2003.

“I checked the time after the climb from the start and I knew it was good,” Jornet said. “I expected a couple guys to come with me on the first climb like Petro and Davide Magnini, but I was alone from the start after a few hundred meters. I have big respect for the record of Jonathan. He was a leader of the sport so to follow in his footsteps is a great feeling. This is special of all the victories.”

Jornet set his sights on the 31km Sierre-Zinal race with a dedicated training regimen that he knew was necessary if he was to approach the record of Wyatt. He scaled back his racing schedule this season to focus on his training in an attempt to see just how fast he could be.

“I usually average about 15 races per year, and there have been years where I did 50 races between trail running and ski-mo, so you don’t train. You race and recover,” Jornet said after his win. “The goal this year was to focus on training and see if it makes a difference in the performance. I always target to win, but I plan a strategy in each race so I don’t really race full-out because I know I have another race just after, sometimes the next week. This year, the goal was to give everything and not have to worry about recovering for the next race. And I was six minutes faster than my best time here so it seemed to work. I thought it was possible to break the record, but I thought I’d be counting seconds.”

In the women’s race, Mathys made sure Jornet wasn’t the only one breaking a record on the day. Her time of 2:49:20 was five minutes ahead of fellow Swiss Judith Wyder (Team Salomon) who finished in 2:54:20, and it broke the former course record of 2:54:26 by five minutes and six seconds. Wyder was also under the former record by six seconds.

Mathys was 3rd at the Dolomyths Sky run in Italy a couple of weeks back, but on Sunday she used her strength in the uphill to put distance between herself and the field in the early stages. She was more than three minutes ahead at the Chandolin checkpoint and was never seen again by the rest of the pack.

Italy’s Silvia Rampazzo (Team Tornado) was 3rd with another strong effort on the Golden Trail World Series. She finished in 2:56:17. New Zealand’s Ruth Croft (Team Scott) continued her amazing consistency with a 4th place finish in 3:01:56, while  France’s Anais Sabrié was 5th in 3:01:58. 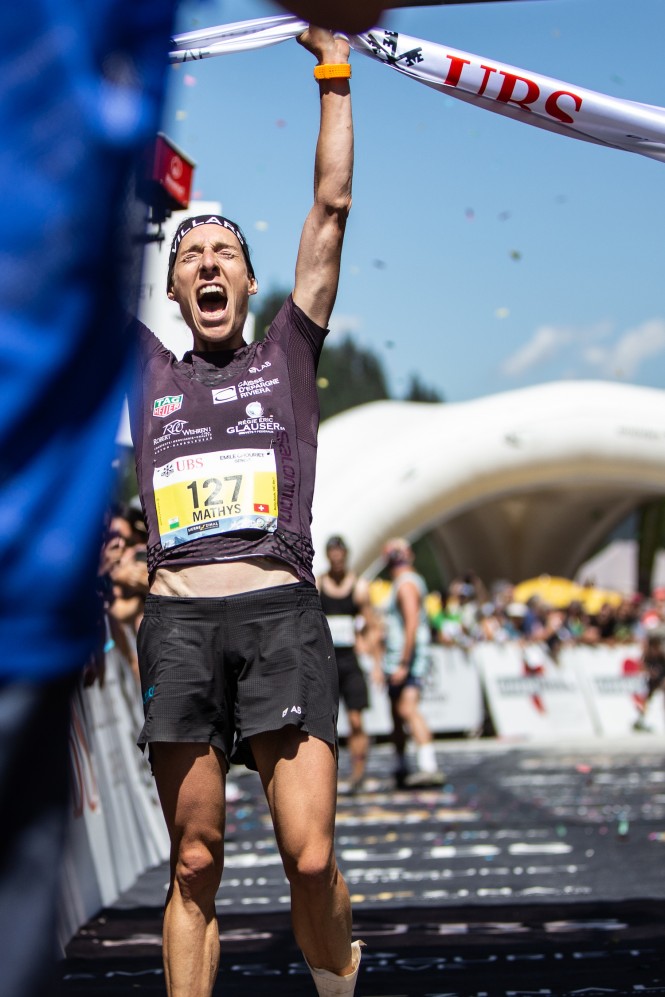 A win and a new record for Maude Mathys ©Martina Valmassoi

For photos and more, visit www.goldentrailseries.com