Day one of the Salomon Skyline Scotland® festival of mountain and trail running saw hundreds of runners taking part in the Salomon Ring of Steall Skyrace™, the Salomon Mamores VK™ and the Grey Mare's 5K Trail Race.

Sebastian Batchelor won the Salomon Ring of Steall Skyrace™ 2021 by a clear 19 minutes today. The 31-year-old Salomon athlete ran a very strong race, leading for almost the entire 29km, and crossed the line in Kinlochleven in 3:34:04. 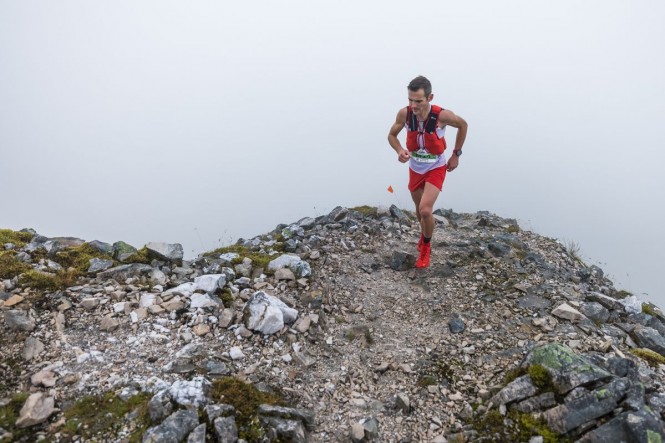 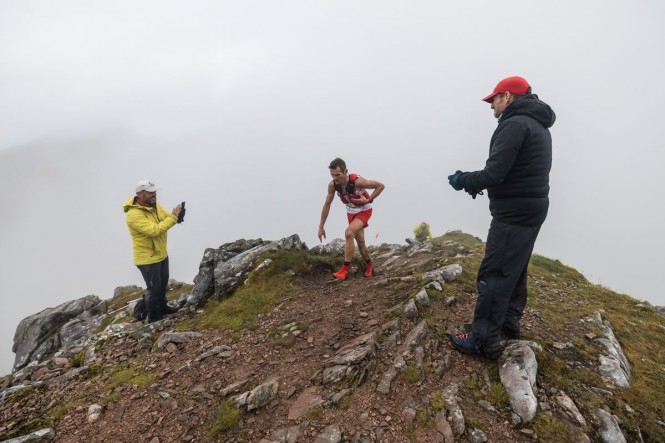 Seb: 'I enjoyed the race.'  © No Limits Photography

Cool and wet, then sunny, in the mountains

Drizzle gave way to a mix of clouds and sun for the Salomon Ring of Steall Skyrace™. Many of the 538 skyrunners were treated to spectacular views of the mountainous Scottish Highlands, especially as the day progressed.

Underfoot conditions were described as wet, muddy and slippery, which made for a challenging 29km route including 2500m of ascent.

Most competitors revealed they were happy that conditions were cool compared to the high temperatures of the last edition of the race in 2019.

The race course travels across the Mamores range taking in a series of four Munros, defined as Scottish mountains with a summit of more than 3000ft / 914m.

There were two lofty ridges to tackle, too, including the Devil’s Ridge, which provides a thrilling and airy traverse with Glen Nevis a yawning drop far below and the UK’s tallest peak of Ben Nevis seen beyond. Even yesterday, Seb, who lives in Ross and Cromarty, Scotland, was unsure if he would be able to race today. He has suffered a series of injuries and combined with the Covid pandemic, the Salomon Ring of Steall Skyrace was his first race in two years.

After crossing the finish line, he said: “I am very happy to be here and to win. I just went out there and ran my own race. I actually enjoyed it.”

Seb, originally from York, led for most of the course, although the first half of the race saw runner-up Tom in closer contention.

The winner said: “Tom and I pushed each other to start with and he caught up with me at one point but then from about half way, where there was a big climb, I pulled away and kept some distance from Tom.

“I was running my own race though and I just got into a rhythm. I kept it steady, especially on the descents but I felt fine. I felt my dicky knee more than my Achilles, which has been the main issue and has needed rehab and patience. It was good to feel fine in the mountains again.

“It’s really great to be back racing and to have won.” 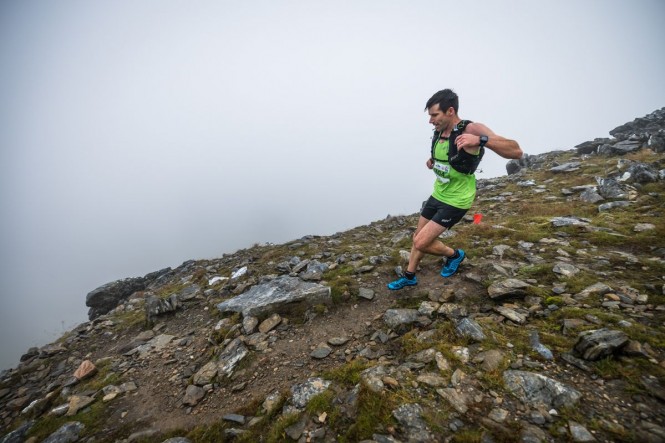 Tom Adams in his first Scottish race, the Salomon Ring of Steall Skyrace™ 2021  © No Limits Photography 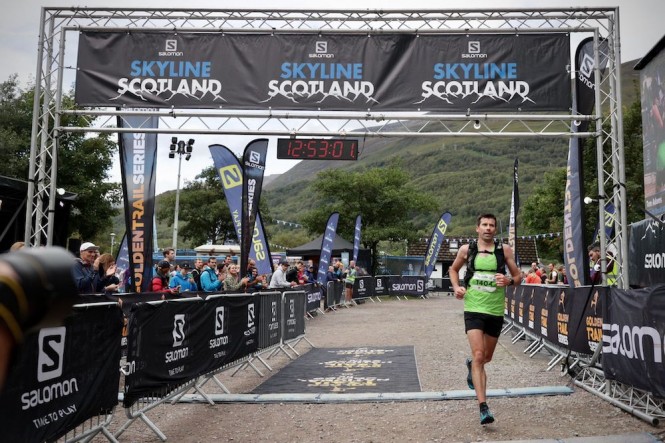 Tom 'It was a tough course' . © No Limits Photography

Tom, who lives near Leeds, was running his first race in Scotland. He said: “I knew it would be a tough course but it absolutely destroyed me. It was a brutal course, with a lot of climbing. However, it was great to see the Scottish mountains and the views when the sun came out.”

He confessed that Seb was the stronger climber. He said: “I kept Seb in sight to start with but not on the long climbs. He was so strong going uphill. He is flying and it is really good to see him back racing.” 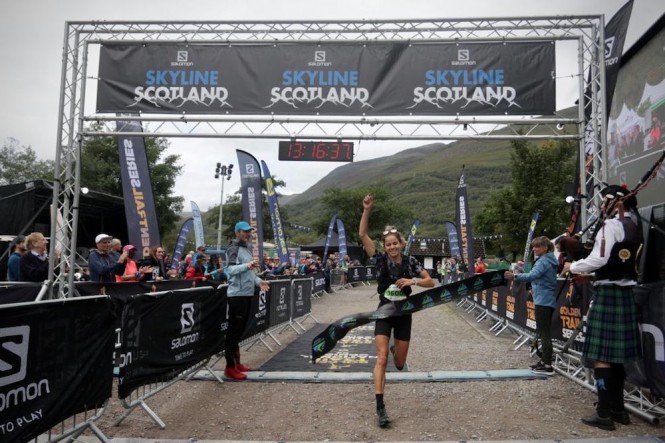 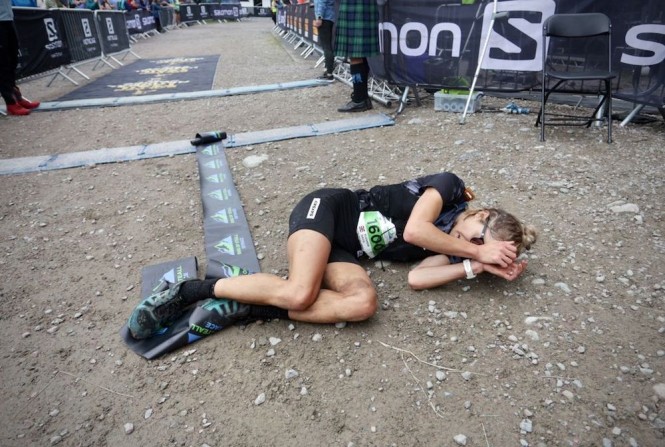 Elsey suffered cramp in the race.  © No Limits Photography 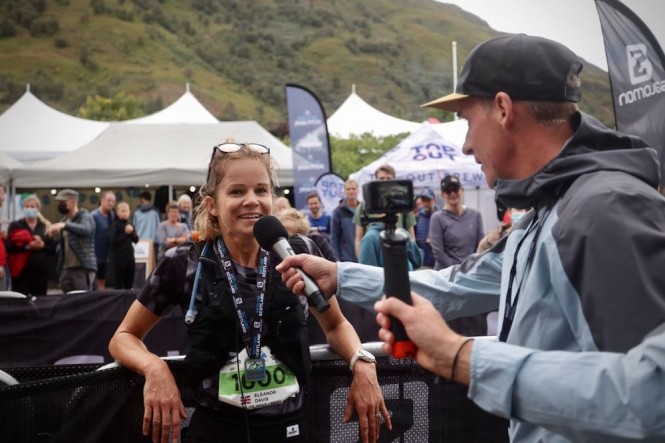 Elsey: 'It was probably the toughest race I have done.'  © No Limits Photography

Cat-and-mouse in the women’s race

Elsey and Isobel ran a close race with a nail-biting finish. In the end, there was just 35 seconds dividing Elsey in first place and Isobel in second.

A former road marathon runner Elsey, from Stockport, Greater Manchester, fell to the ground after finishing, clearly having given the race her all. A few minutes later, she said: "That was probably the hardest race I have ever done. I have bad leg cramps now."

She added: "It was good to have Isobel’s company and we pushed each other. It was a bit cat and mouse and good fun.

“We also really enjoyed picking off the men one by one.”

Elsey, originally from Cornwall, had been very unsure about the course. She said: “I am very scared of heights and I was worried about the ridges. I wasn’t even sure I wanted to do the race. It was a technical course for me.

“But I managed it and I am pleased. I just tried not to look at what was below me."

Like Tom, Elsey has booked a place at the Salomon Golden Trail Series Grand Final. She said: “I am glad I faced my fears of the heights in this race. It was worth it for my trip next month to the Azores.”

Isobel enjoy the race against Elsey. She said: "It was great to run with someone else. My legs failed me a bit on the last climb and and I was surprised to see Elsey on the last descent. I gave it everything I had on that descent to try to catch her but I couldn’t. She ran a good race.” 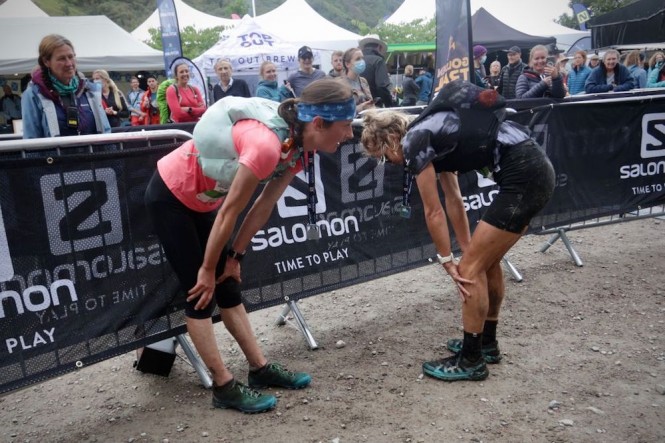 Elsey, right, and Isobel recover after the Salomon Ring of Steall Skyrace™ 2021  © No Limits Photography A runner leaves the Kinlochleven event village for the Salomon Mamores VK™ 2021 race.  © No Limits Photography 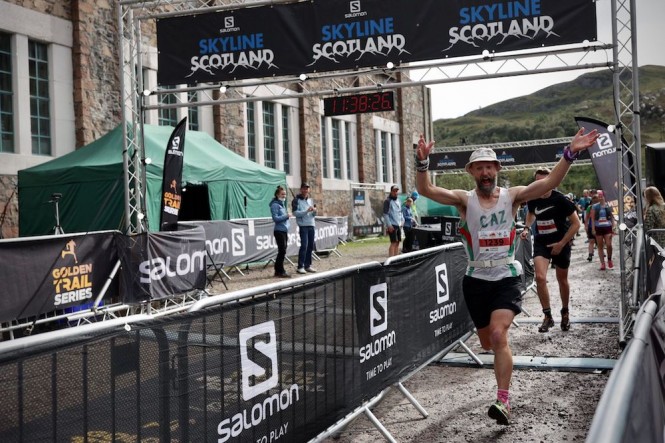 A happy runner at the start of the Salomon Mamores VK™ 2021 race.  © No Limits Photography 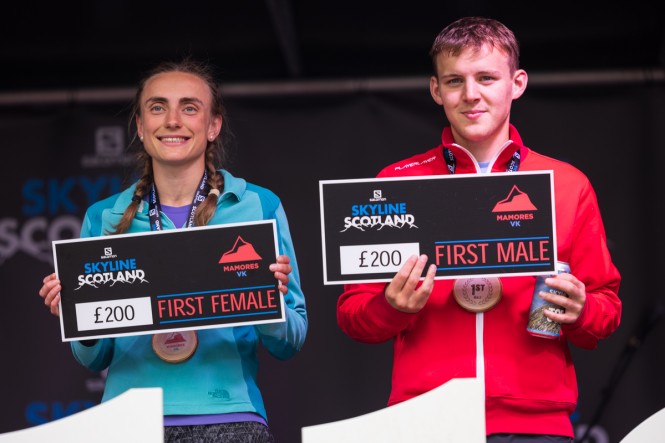 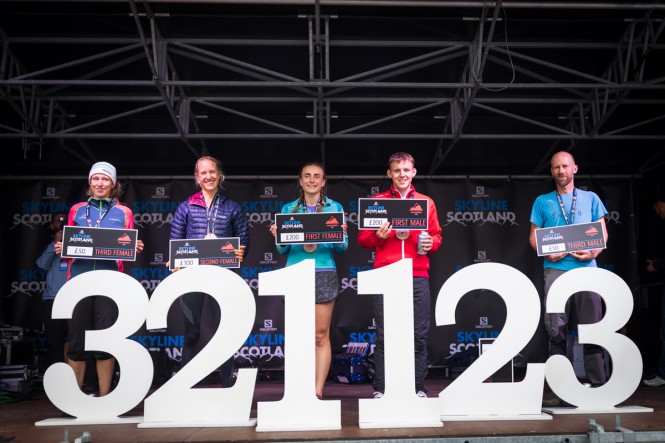 The top runners take to the stage to collect medals and prizes.  © No Limits Photography

With a total of 89 runners leaving the start line at intervals throughout the day, the overall winners were not announced until the afternoon.

First male Alastair, 21, of Edinburgh, described the race as "type two fun". He said: “It was pretty grim to be honest! I had a tough time on the steep sections. I was very happy to get to the top. Winning is great.”

Winning female Rachel, 27, of Aberdeen, said: “It was a great race – tough but beautiful. I am shocked to win. It was a surprise but great.”

The race follows the International Skyrunning Federation Vertical Kilometer® format in which participants run a marked course gaining 1000m of height in less than 5km. From Kinlochleven there is a leg and lung-busting ascent from sea level to mountain summit.

The Salomon Mamores VK is part of the International Skyrunning Federation’s VK OPEN Championship this year.

Mike Dales and Fiona Manson, from Perth, were competing in the Mamores VK for the fifth time. They said: "It was probably the most perfect conditions yet. It was warm but not too hot. There was a nice breeze at the top. We really enjoyed it." 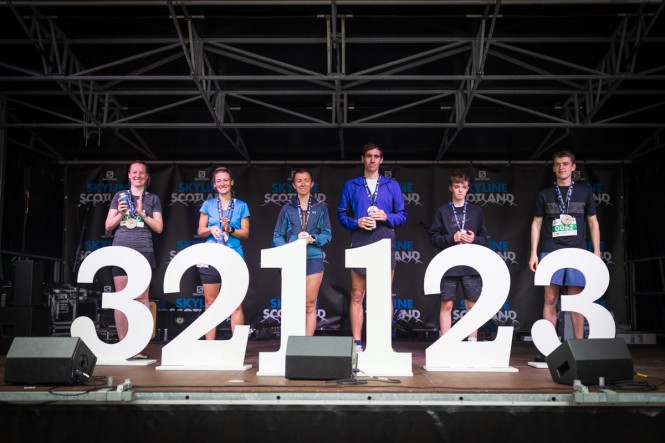 The 5k Grey Mare's Trail Race took place this morning. One of three trail races held over the Salmon Skyline Scotland weekend, the route starts and finishes in the Event Village and initially shares the same first section with the Mamores VK race.

The undulating and challenging route was described by a  previous runner as “fantastically action packed”. 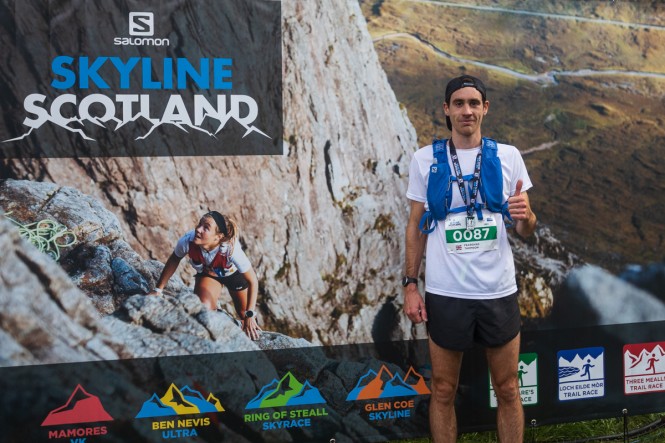 First placed Fearghas, 31, of Edinburgh, said: “It was my first time at this event and I am not normally a trail runner. It was a good route. Flattish to start with but then a big up and then undualating before a steep descent.

“It was muddy and slippery but I thought it would be. I am pleased with my win.” 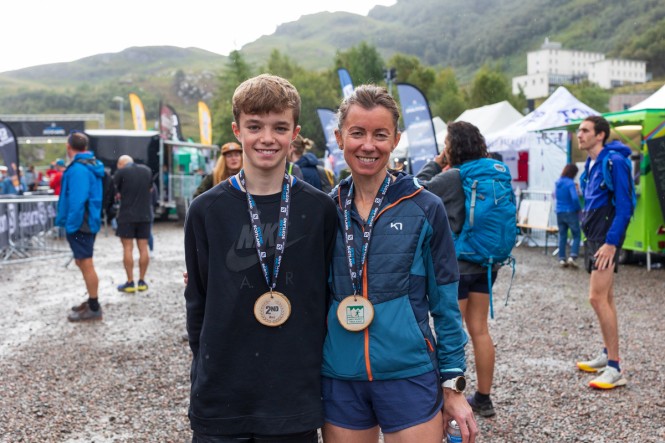 Mum Lynn was first female, while her son Struan was second overall in the 5k Grey Mare's Trail Race. © No Limits Photography

Lynn was first female, while her 14-yer-old son Struan was second overall. He beat his mum by almost five minutes.

Lynn, 43, said: “I am well used to being beaten by my son! I was expecting to be beaten by him.

“I think I am still faster on longer runs, just, but not on a 5k. He overtook me on shorter distances when he was about 10.”

Struan added: “I am happy to be faster than my mum and happy to win. I did the course two years ago and I enjoyed it again.” Glencoe MRT and Lochaber MRT are presented with £3000 each from Salomon Skyline Scotland. © No Limits Photography

Andy Nelson, of Glencoe MRT, said: “The donation is significant for us because all rescue teams in the UK are staffed by volunteers and they rely on donations.

“A fraction of the finance to run our services comes from government and other organisations, such as the police. Donations from the public are vital to be able run our service. We are grateful for the money from runners in this event.”

Mike Smith, Lochaber MRT, added: “Our team needs about £85,000 annually on average to run and we only receive £24,000 funding so every other penny of that comes from the public. We could not do what we do without that.

“This money is super kind. I hope that participants will remember, too, that all their local mountain rescue teams across the UK need donations like this to keep going.”