5 nutrition tips tailored to the Salomon Glen Coe Skyline™ from none other than GB international Salomon athlete, and 2015 race winner, Joe Symonds! 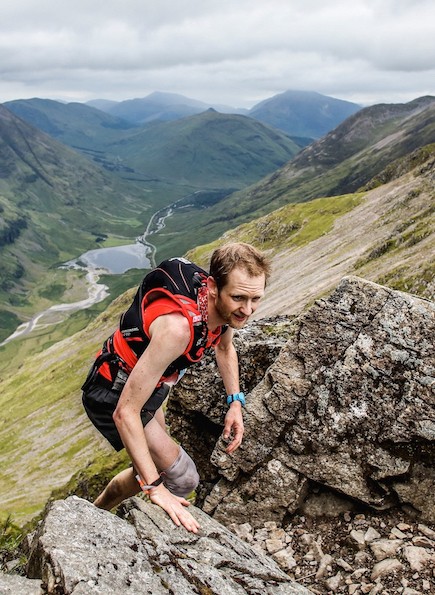 I cannot emphasise this enough. So often I hear people tell me how they were going really well in a long race but suddenly their legs seized up, they felt lightheaded, and they lost loads of ground.  What has happened is simply that the tank has run out. If you don’t want this to happen you have to keep putting fuel in, don’t simply rely on hunger cues. Once you are hungry it is too late. Once you feel sick it’s definitely too late!

Before you start the race you should have a good idea of when you are going to take fuel on board. During intensive exercise you should be consuming 3-6 kilocalories per kilogram of bodyweight per hour. For me this means about a 250kcal gel or bar every 45 minutes of running, and this is what I did during the Salomon Glen Coe Skyline™ 2015. Every time my watch said I’d been going for 45 minutes I looked out for the next opportunity to take on another gel or bar.

3) Use the climbs to refuel

The business of getting a gel or bar out of your pack and eating will slow you down a little, so if possible try to do this on a climbing section of the course (not too difficult to find those in the Salomon Glen Coe Skyline™!). If you realise that your next bar is due in 15 minutes but you think you are 5 minutes from the top of a climb, then refuel a little earlier than scheduled. You will need all your concentration for descending. An added bonus of eating on the climb is that it can take your mind off the difficulty of the ascent. 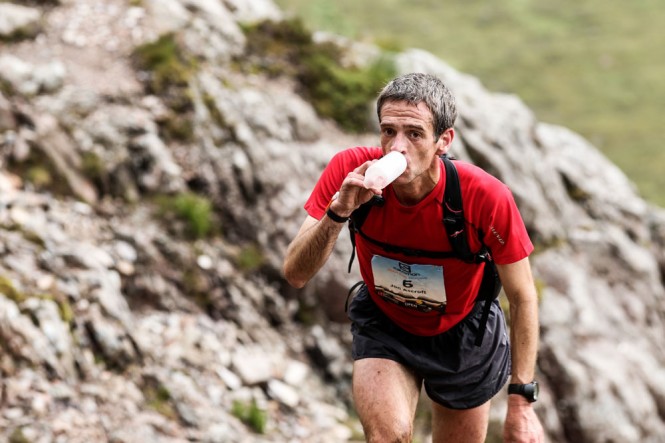 Make a strategy for keeping yourself hydrated. I don’t like running with a lot of water as it is heavy, and in many of the races I do there is plenty of water around in streams and rivers. I use easy-fill soft flasks. If you are planning to drink from streams make sure that you’ve had a good look at the race map so you can anticipate where the water will be. Make use of the water that you are offered at aid stations as well. Drinking to thirst will generally keep you right.

5) Vary what you eat

Don’t just stick to one energy product. Different products have different mixtures of nutrients in, and you are likely to get sick of eating the same gel 12 times in a row! I tend to alternate energy gels with energy bars and mix up the flavour as much as possible. If every gel you take on contains caffeine you are likely to get an overdose. I tend to save caffeinated gels for the last 2 hours of the race, when the caffeine helps release extra energy from fat stores.