CANAZEI, ITALY – If Italian trail runner Davide Magnini (Team Salomon) announced his presence in this year’s second edition of the Golden Trail World Series with his win at the Marathon du Mont Blanc in late June, this weekend he solidified himself as one of the favorites in the season-long series. On Sunday morning, the 21-year-old Italian runner from Team Salomon took apart another impressive field, this time in his homeland, winning the Dolomyths Run in 2 hours and 28 seconds, 17seconds from Kilian Jornet’s record held since 2013.

At 22km, Sunday’s race in the Italian Dolomites was considerably shorter than his previous victory in Chamonix, but it was just as impressive. Davide led from early-on, climbing the 1,700 vertical meters in record-breaking time. It was all downhill from there for the Team Salomon runner.

As he was in Chamonix, Italian Nadir Maguet (Team La Sportiva) was 2nd to Magnini in 2:02:54. This time, he had company, finishing alongside Morocco’s Elazzaoui Elhousine (Team Tornado), who was credited with the same time. 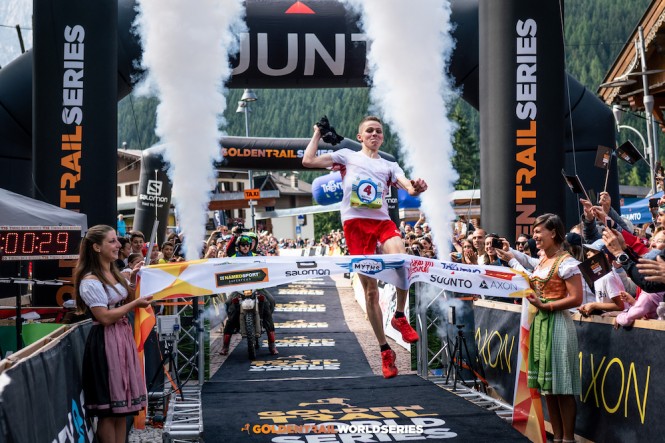 In the women’s race, Switzerland’s Judith Wyder (Team Salomon) took the lead from fellow Swiss Maude Mathys (Team Salomon) on the downhill to win in 2:18:51 breaking the old record by 7min. New Zealand’s Ruth Croft (Team Scott) continued to impress with a 2nd place finish. She also passed Maude on the downhill to finish in 2:21:56. Maude Mathys, who was the first to crest the high point of the course at Piz Boè (elevation: 3,152 meters), held on to the final spot on the podium in 2:22:08.

“I didn’t know I passed Maude, actually,” Judith said at the finish line. “You have to charge hard somewhere and you have to be smart. I knew that I had a fast downhill so I took my chance when I knew I was just 40 seconds behind. I love it here. I have been really successful here years ago and it’s great to come back and have a great race again. The downhill fits me really well. The uphill was really tough. I tried to stay behind Ruth and push a bit when walking.”

Davide has been one of several young talents that trail running aficionados have pointed to as the next generation to lead the sport on the men’s side, and he is certainly living up to that billing this season. On Sunday, he made it a double win weekend after his victory in the Vertical Kilometer race on Friday. The 22km race on Sunday required a more lengthy effort, but the young Italian seems comfortable at any distance at the moment. 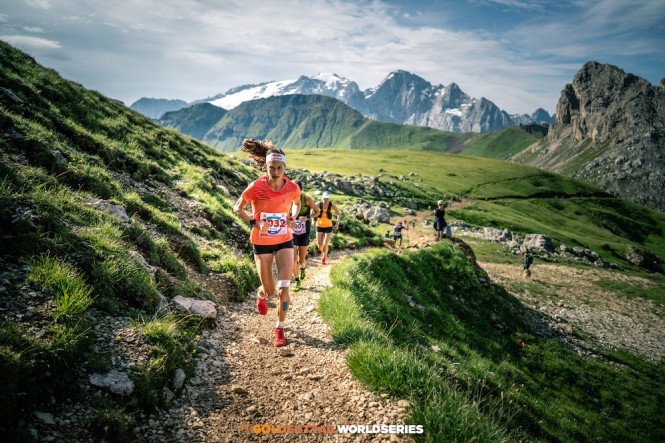 The next stop on the Golden Trail World Series is the always entertaining Sierre-Zinal race in Switzerland, where the field will include Spain’s Kilian Jornet, who won there in 2018 for the sixth time.