The 2018 Skyrunning World Championships got off to a thrilling start yesterday as runners smashed course records in the Salomon Mamores Vertical Kilometer® (VK) race.​

The race is a challenging Scottish version of the traditional VK format – and for the first time in Scotland the runners were racing to become Skyrunning World Champions. Over a 5km distance, the route gains 1000m from sea level, initially on good trails before breaking out of the tree-line on to the exposed high side of the mountain, Na Gruagaichean. This section is steep and rough, before a rocky ridge leads to the 1056m summit.

Kicking off the 2018 Skyrunning World Championships

The #SkyWorldChamps18 kicked off with the VERTICAL race today - records were smashed by: Laura Orgué (-1m 13s) & Rémi Bonnet (-2m 42s) Congratulations to all runners battling the elements today - a tough day out on the VK course Full results: www.skylinescotland.com/mamores-vk/results/2018-results/

Records fell one after the other in the exciting but challenging first race of the Skyrunning Federation (ISF) 2018 World Championships.

First to the finish line on the summit of Na Gruagaichean was Swiss athlete Rémi Bonnet in 39:23. His time beat last year’s best ever, 42:04, by an impressive 2:41. 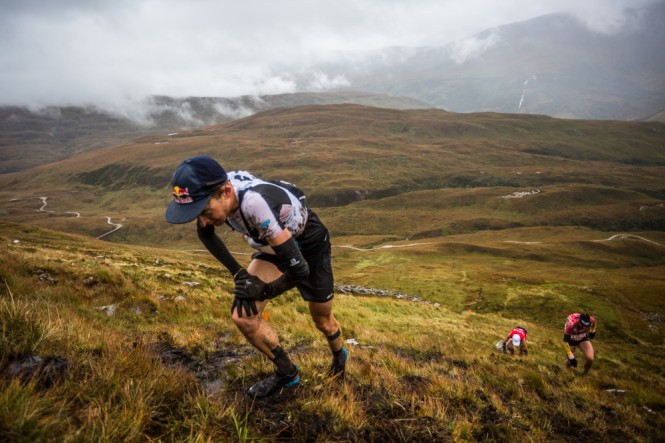 He was also 2:26 ahead of the runner up, Thorbjørn Ludvigsen, of Norway, who finished in 41:49. In third place was Stian Angermund-Vik, also Norwegian, in 41:50, who won the VK last year and set the previous record.

Salomon sponsored Rémi, 23, said: “It “It feels very good to be the winner of this race. It was really cold out there and in the first part of the race I fell into a bog up to my waist.

“But I enjoyed the course and I love running in the mountains so I was very happy to racing in Scotland.” 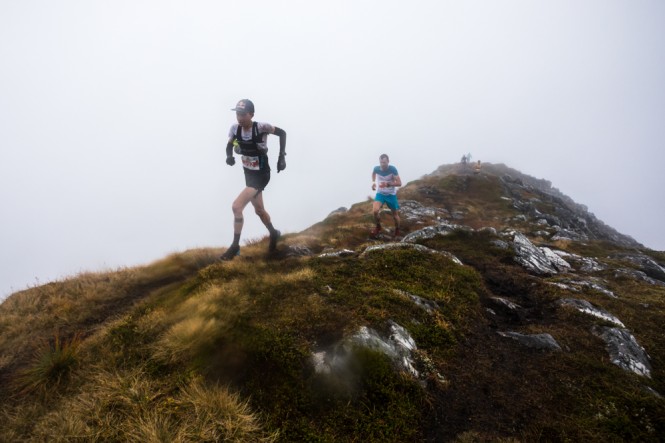 Winner Remi Bonnet pushes on ahead of  Stian Angermund-Vik. Credit- No Limits Photography 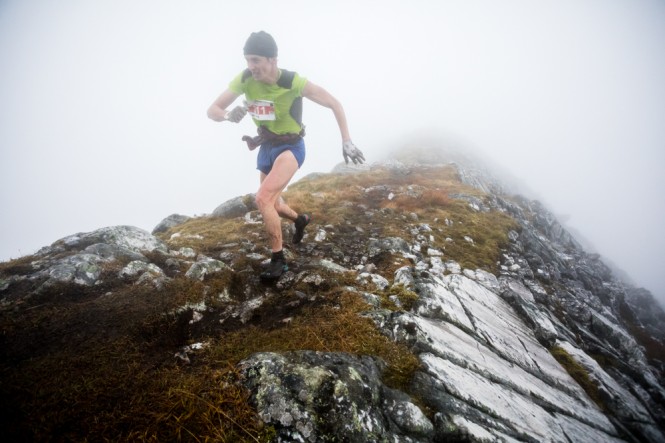 Thorbjørn said he felt like he was at home, training in the Norwegian mountains. He added: “Scotland is like Norway and I thought the course was a really good.

“It was cold and very windy higher up and that is like my home country but, you know, the cold does make it tough.

“I am very happy to finish in the top three.”

Stian, also a Salomon athlete, reported that he was content to settle for third place. He said: “I am happy because I ran as hard as I could and I have a personal best time of 41:50.

“The first time I did this race I was second, then last year I was first and now I am third. That feels okay to me.

“I love racing here in Scotland. It was wet and cold but it was beautiful. I will be back next year I hope.”

The Salomon athlete ran a PB of 51:34, also breaking her previous best race time of 52:55, and came home ahead of the second placed female by almost a minute.

She said: “I am from southern Europe where it is much warmer so I found the race very cold. It was a hard course as well but I am happy to finish and I am very happy to be the winner.” 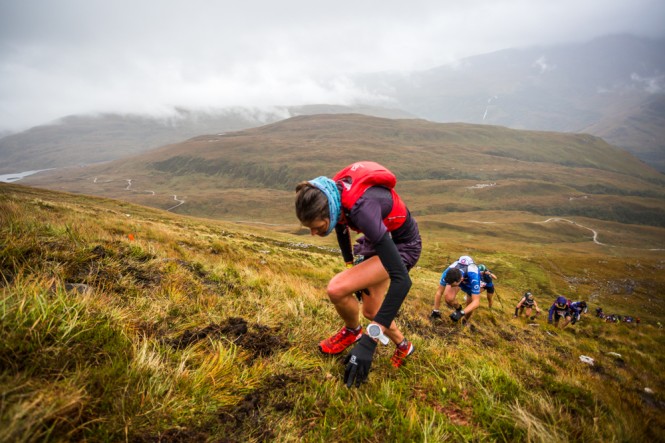 Spanish runner Laura Orgué, winner for a second year in a row, on the Vertical Kilometer course. Credit- No Limits Photography

Lina El Kott Helander, of Sweden, finished second in a time of 52:34 and in third place, just a second behind, was American athlete Hillary Gerardi in 52:35.

Hillary said: “It wasn’t easy because I twisted my ankle and I fell on my face in a big puddle. That slowed me down.

“But when the route got steeper it was better for me because I got into a good rhythm.

“I was third by only one second so I think I will have to come back to do this race again.”

Runners push for the top in the VK race. Credit- No Limits Photography

‘Cold but we loved it’

Many of the 350 runners returned to the Event Village base after the VK race saying they were cold but reporting on how much they had enjoyed the challenge.

Pete Cox, number 35, said: “It was really cold, wet and cloudy up there with strong winds but I still enjoyed it.”

Adam Green, number 168, said: “I am delighted with a 13-minute PB. After doing the race last year I realised I wasn’t fit enough so I moved home to the Lake District and started training much harder. I am absolutely buzzing about this year’s time.”

Lindsay Buck, number 43, said: “It’s my second time doing this race and I loved it. I like going uphill and the scenery here is awesome.”

Bill Duff, number 119, said: “It was very hard but you have to keep going. I am seven weeks short of my 70th birthday and I had a heart operation two years ago but I don’t like to give up. I love running and I have done many hill races. This was a great event.”

Hannah Havelock-Allan, number 491, said: “It was very, very cold at the top and the winds gusted very strongly. But I am glad I did the race.” 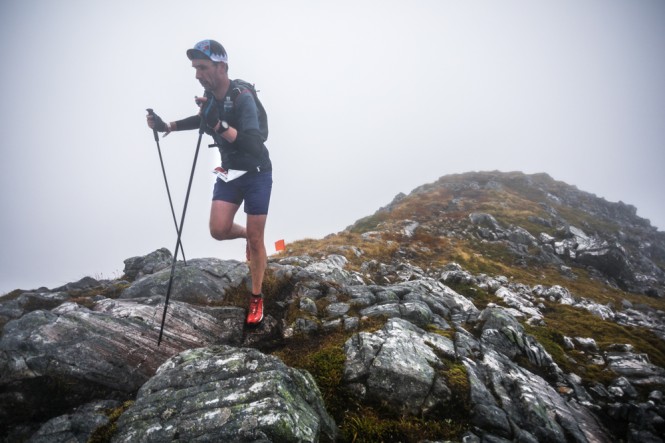 A tough shift as a runner near the top of the VK race course. Credit- No Limits Photography

They were each presented with a Skyrunning World Championships 2018 medal as part of a celebratory Opening Ceremony.

The ceremony also featured a flag parade and music and singing from pupils at local schools, Ardnamurchan High and Kinlochleven High.

Fittingly ,for an exciting first day or racing, the ceremony concluded with a display of fireworks.

The Skyrunning weekend is hosted by Skyline Scotland. Race director Shane Ohly said:  “Today’s VK race proved to be a tough but up-beat start to what looks set to be a very competitive weekend of Skyrunning.

“Scotland’s mountains and weather gave the runners a big challenge, yet records were broken in both the male and female races.

“This sort of racing showcases the calibre of the athletes who want to race in Scotland’s magnificent Highlands landscape.” 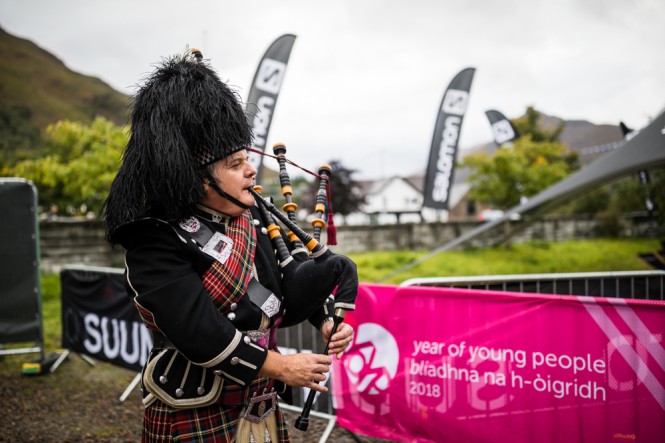 A piper sets off the runners in VK race. Credit- No Limits Photography

What’s next in the Skyline Scotland race weekend?