After another successful season for its 3rd edition the series is going to a new continent for the Grand finale and also announces new rules and prize money.

In 2019, the best short-distance trail runners on the planet convened to race head-to-head at six of the most prestigious trail running races on the calendar as part of the Golden Trail World Series. The top 10 men and women in the season-long points standings earned a spot in the Grand Finale at the Annapurna Marathon in Nepal. The final had the highest level ever reached in a trail-running race with the best top 10 ever. The ITRA* points’ average (category S) was 905 for the men and 765 for the women.

Also each race of the Series has seen the race’s level increase. To cite only a few: at the Marathon du Mont-Blanc in 2018, 7 runners finished under 4H10 and in 2019 there were 17, at Sierre-Zinal in 2018 there were 10 runners who finished under 2H40 and 16 this year. Fourteen of the top twenty ITRA ranking (category S) male athletes participated in the entire Series, and seven women.

Concerning media communication, the Series is still stretching boundaries. From 503 stories and a potential reach of 269M in 2018, this year 903 stories were written with a potential reach of 2,060M (+665%) and 7 incredible 24-min films have been produced and shared on social media and TV all over the world in addition to other content shared on social media.

In 2020, the Golden Trail World Series (GTWS) will once again feature these six iconic races, but with a new Grand Finale that will be staged at the K42 in Villa Angostura – Patagonia - Argentina. A fast race at low altitude, after the epic Annapurna Marathon, which culminated at 4,122 meters above sea level. 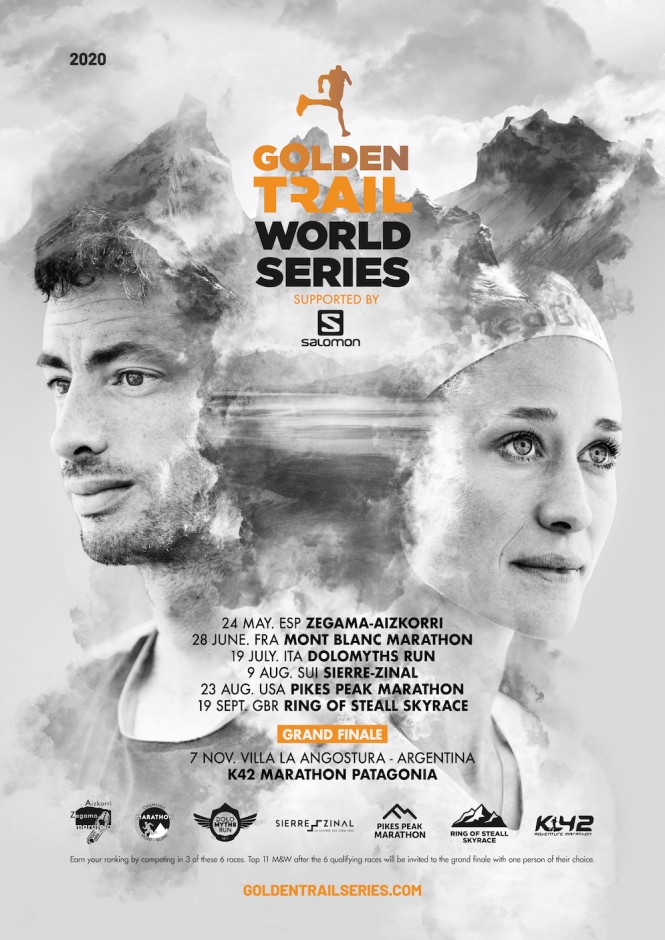 Next year’s edition is likely to attract even more elite athletes than the 2019 edition, with many of the top runners returning and several rising young stars expressing their interest in taking part. The new rules and prize money should convince the latter to jump to the start line.

All these modifications aim to elevate the level of each race, and above all create increased excitement at the final where everything is still possible for each runner. They will have to reach the final with a maximum number of points to secure the top 5 and the €10 000. Inviting the 11th, the fight will be even harder for the 10th position.

The GTWS hopes these changes will create increased interest and higher entertainment for the elites and spectators alike.

Having six races, plus the final allows the young generation to come to the three shorter races—the 22km Dolomites Skyrace, the 32km Sierre-Zinal race and the 29km Ring of Steall—if they prefer. The more mature runners may choose to focus on the three marathon-distance races. Then, when the top- 10 men and women meet in the Grand Finale it will create an exciting finish.

The schedule will be the same as 2019 and will include Zegama in Spain’s Basque Country, known as

The overall final standings (along with the men and women’s champions) of the Golden Trail World Series will be determined again by the runners’ three best finishes during the season, plus their result at the Grand Finale.

The Golden Trail World Series 2019 season was a huge success, with many of the sport’s top runners participating in the races. This brought the level of competition to new heights. In 2020 the GTWS hopes to broadcast the sport to a larger audience, bringing benefits to those closest to it — the athletes, media, brands and the trail running community as a whole.

The Golden Trail Series stands out in the modern sports world respecting unique values like parity, equity, transparency and honesty. The races have been chosen to highlight the most iconic events in this sport today. The Series aims to promote professional trail runners as the world-class athletes that they are, to showcase and protect the awe-inspiring nature and environments where we play and compete, and to acknowledge the amazing, passionate fans as an essential ingredient in the sport. Each of the six races in the Series has been specifically selected because of the scenery, challenges, history and atmosphere that they offer to both the runners and the public. These are the races that every runner wants to experience and some of the first written on any runner’s bucket list.