Norwegian Erik Johannes Husom was victorious in the Salomon Glen Coe Skyline 2019 in his first ever skyrunning race. First female Georgia Tindley added the race to her collection of Salomon Skyline Scotland triumphs.

Enjoy all the highlights from the final day at Salomon Skyline Scotland 2019. Including the iconic Salomon Glen Coe Skyline, the new 10km and 18km Trail Races and all the goings-on in the Event Village. Credit: Summit Fever Media, Steve Ashworth and Calum Maclean #skylinescotland

The winners of the Salomon Glen Coe Skyline 2019 could not stop smiling as they crossed the finish line today. For Norwegian Erik Johannes Husom, 24, it was his first attempt at a sky race and he was thrilled to take first place in 7:55:00.

He said: “I can’t believe it. It is incredible to take the win here. This is the biggest race yet for me.”

Georgia Tindley, who lives in Kingussie, Cairngorms, was the first female in a time of 8:29:57. In 2016, Georgia, 27, was the winner of the Salomon Mamores VK and the Salomon Ring of Steall Skyrace.

She said: “Today feels unreal. I just can’t believe it.” 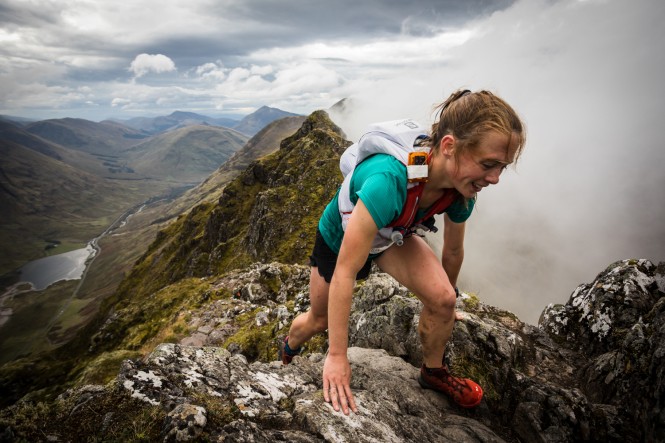 What is the Salomon Glen Coe Skyline?

A technical and very challenging course, the Salomon Glen Coe Skyline, now in its fifth year, extends to 52km with a total ascent of 4750m. The course includes two infamous Glencoe ridges.

Runners must then commit to a full traverse of the Aonach Eagach Ridge, which includes a leg-busting ascent and descent and some exposed Grade II scrambling.

After two days of unseasonably hot sun, most runners welcomed lower temperatures for today's race. There was a wide mix of weather, so much more typical of Scotland in September, including cloud, wind and spells of rain, as well as sunshine later on. A huge smile as Georgia crosses the finish line first.  ©No Limits Photography Erik is elated as he wins the Salomon Glen Coe Skyline. ©No Limits Photography

There was a fight for places among the top four finishers in the Salomon Glen Coe Skyline today. While Erik showed his strength in the end, second placed Andy Berry, of England, third placed Greg Vollet, of France, and Scot Andrew Barrington, who was pipped into fourth place, all finished within nine minutes.

Erik, who was seventh in the Salomon Mamores VK on Friday, said: “Going into the race, I hoped I might finish in the top 20 but I have had a rough year with pneumonia so I have lost a lot training.

“But when I was in the top three at half way through the race I grew in confidence. I knew I had strength on the climbs and on the downhills so I just tried to keep going and focus on the podium.

“I was nervous, though, and I kept looking over my shoulder for the others. It is incredible to be the winner in my first sky race and this feels like a kind of breakthrough for me.”

Andy Berry, 34, of Durham, finished almost four minutes after Erik in 7:58:54. He said: “I think I paced it well and I had a good day. As I climbed up to the Aonach Eagach ridge I could see a couple of other runners ahead.

“It was pretty tight between us runners across the ridge but then on the final descent I pushed hard. The terrain suited me.” 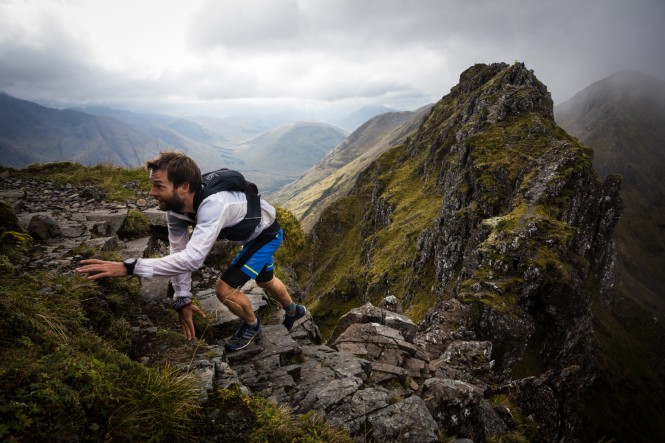 A runner on the Aonach Eagach ridge. ©No Limits Photography A runner on Stob Dearg. ©No Limits Photography A challenging race. ©No Limits Photography

Andy, who trains with Durham Fell Runners, competed in the same race in 2017, coming 29th. He had returned to race again to “put it right”. He said: “In 2017, I went out too fast and blew up so I had a bad race that day. Today was much better.

“The weather suited me and the course is spectacular. I ran all day with a smile on my face.”

Third male Greg Vollet crossed the line in 8:03:32. The global Salomon Team manager has previously competed in the Salomon Glen Coe Skyline placing fifth in 2016 and 24th in 2018.

After finishing today, he said: “I wasn’t even expecting to run today so it is a big surprise to podium. My legs are totally destroyed though.”

Just outside the podium was Scot Andrew Barrington in 8:03:51. Georgia takes on the Stob Dearg climb. ©No Limits Photography Georgia, who is originally from London, said: “I had a look at the start list going into the race and I thought I might have a chance but you never know who will turn up and how they will race.

“I also raced last weekend in the ZacUp SkyRace in Italy and came fifth so I wasn’t sure how I would go today.”

Georgia also placed eighth in the Tromso Skyrace this year and she was sixth 2018.

Today, the Hunters Bog Trotters' athlete led from the start but she reveals she had no idea how the other ladies were doing. She said: “I just kept pushing on and looking over my shoulder. I was expecting others to catch up. I really like steep climbs and I enjoyed the Curved Ridge the most today but I am not so good on the downhills.

"Also, I didn't feel too good on the Aonach Eagach ridge. Before that I had felt quite good and I think I maybe pushed it too hard then and that affected me later on. That last 20km was tough and I had to cling on.

"It’s so nice to win a race that is local to me and it is one of my best results, especially this year.”

It was 24-year-old Ann Penelope Spencer's first time in the race. She had been inspired to take part in the race after friends competed previously.

After the race she said: “I was out to enjoy a long day of racing. The good thing was the wheels never came off.”

Dark Peak fell runner Megan, 27, found the race hard on her legs. She had just returned from the Silk Road bike race. She said: “Today’s race was hard, especially the descents. I did worry that going into the race I was a bit out of my comfort zone but I enjoyed it and especially the scrambling."