In light of the continuing health restrictions for travel to the UK, the Ring of Steall Skyrace has been replaced with the Skyrhune in France for the 2021 Golden Trail World Series.

Due to the same problem, where travel is still complicated and constantly evolving in certain countries, the Golden Trail World Series Final can sadly no longer take place in Argentina. A race for the Golden Trail World Final will be specially organised in El Hierro, the Canary Islands, on 16th October 2021. 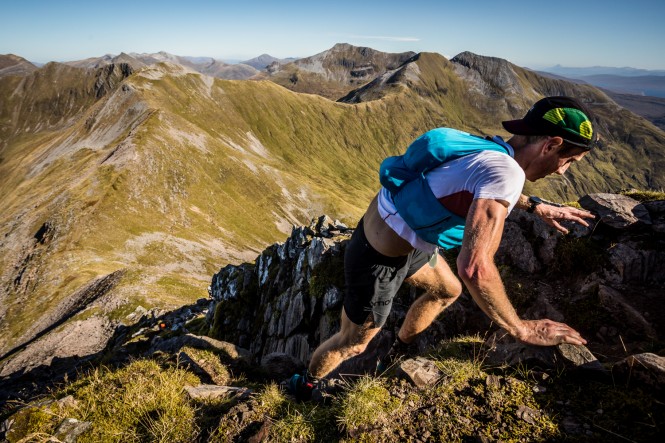 The 2019 Ring of Steall Skyrace® ©No Limits Photography

The Ring of Steall Skyrace™

Due to current restrictions for entering the UK - enforcing 10 days mandatory quarantine and paying for two Covid-19 tests, all for vaccinated and non-vaccinated individuals coming from amber-listed countries - the Golden Trail World Series has taken the difficult decision to replace the Ring of Steall Skyrace, Scotland with the Skyrhune, France.

The global situation is constantly changing, and it is currently impossible to know if these restrictions will be lifted by September. The organisers must anticipate and decide now, in order to allow the athletes, races and GTWS organisers to adapt as quickly as possible.

The Ring of Steall Skyrace is obviously very disappointed as Pikes Peak was, but fully understand the complications and the GTS’ decision.

Shane Ohly at Ourea Events, the Ring of Steall Skyrace race organiser explains, "It is a tremendously challenging time for many businesses. Anyone involved with events and travel have been crippled by COVID-19. I certainly understand the huge uncertainties that international travellers face at the moment, and the practical restrictions to travelling, such as mandatory quarantining. As such, we continue to see many foreign participants withdrawing from our other events and this news from Salomon is not unexpected”.

“We have some sense of the plans from the Welsh and Scottish governments because Skyline Scotland and the Dragon’s Back Race are supported at a national level. My expectation is that by September there will be little or no restrictions for UK residents attending events in these countries. However, I think it is likely that the travel restrictions for international participants will be still in place".

Nevertheless, the Ring of Steall remains the final for the Golden Trail National Series UK.

On the other hand, the Skyrhune race organiser is thrilled to host the last qualifying stage of the 2021 GTWS, as well as the Golden Trail National Series France/Belgium final. Replacing the race instead of simply cancelling it enables all the athletes to participate in 3 races out of 6 and continue to provide three short and three marathon format races. Take a look at the race specs here.

As a GTWS 2021 qualifying race the prize money of course remains unchanged, respecting the minimum limit imposed by the GTWS: €1000 for the top 5 women and men.

The rules for invitations remain the same as if it was the Ring of Steall:

We look forward to seeing you all at the Skyrhune, the last qualifying race of the 2021 Golden Trail World Series, on 25th September 2021 in Ascain, France.

Why is it in El Hierro?

As briefly explained above, travel restrictions are many and varying in different parts of the world, notably for travelers from the Schengen area wishing to travel to Argentina. The French Ambassador’s website cites the following: "At this time, only Argentinian nationals and foreigners residing in Argentina benefit from lifting access restrictions for entering Argentine territory."

The Golden Trail Series once again regrets this new race change and cancellation. The K42 race organizers are not to blame in any way. We sincerely apologize to the runners who registered in the hope of running with the world’s best trail runners. We are all trying to do the very best possible in this extremely complicated context. El Hierro, like the Azores, where the Golden Trail Championship was held, is an island and therefore controlling who arrives and leaves is much easier.

Why has the date changed?

We are trying to stay ahead in case there is another winter wave of Covid-19. We are concerned that travel will once again be totally blocked and so, decided to move the date forward, whilst leaving at least a three-week gap after the last race stage, the Skyrhune.

We once again thank everyone for their understanding, adaptability and their continual support and love for this sport.

The Golden Trail World Series stands out in the modern sports world respecting unique values like parity, equity, transparency and honesty. The races have been chosen to highlight the most iconic events in this sport today. The Series aims to promote professional trail runners as the world-class athletes that they are, to showcase and protect the awe-inspiring nature and environments where we play and compete, and to acknowledge the amazing, passionate fans as an essential ingredient in the sport. Each of the six races in the Series has been specifically selected because of the scenery, challenges, history and atmosphere that they offer to both the runners and the public. These are the races that every runner wants to experience and some of the first written on any runner’s bucket list.