If you haven't used SI Entries before (or logged into your account in a while), **we recommend making sure you can log in** before the midday rush! 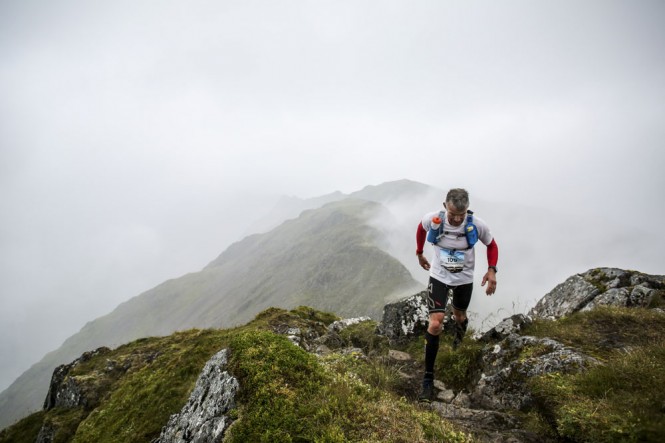 Above: Will Manners high on the Aonach Eagach, finished 22nd overall at the 2015 Salomon Glen Coe Skyline™. © Ian Corless

After the phenomenal success of the inaugural Salomon Glen Coe Skyline™ in 2015, and the recent announcement that the event joins the prestigious Skyrunner® World Series in 2016, the event is widely expected to sell out within hours of opening at 12:00 GMT on Monday 1st February.

In anticipation of this increased demand the organisers have added two new races, the Mamores Vertical Kilometre® and the Ring of Steall Skyrace™, to the weekend of racing, which now looks like this:

“On Friday we are inaugurating the Mamores Vertical Kilometre®, which is part of the 2016 UK Skyrunner® Series and the UK’s first VK”, said race director Shane Ohly. “The Mamores VK® features an incredible leg-burning, and lung-busting ascent from sea level to Munro summit, which sees competitors racing to gain 1000m of ascent in less than 5km”.

He continued, “The following day we have our first Ring of Steall Skyrace™, which is a variation of the classic Ring of Steall ridge-walking route. Our course provides 25km / 2,500m of mountain running with spectacular views of Ben Nevis from the Mamores and includes short sections of easy scrambling."

The Salomon Glen Coe Skyline™ is renowned for the technical terrain that the race route covers including scrambling up Curved Ridge and along the Aonach Eagach. Entries to this event are subject to vetting by the organisers. However, entries to both the Mamores Vertical Kilometre® and Ring of Steall Skyrace™ are unrestricted and, although the mountain environment into which both these races venture is challenging, they are less serious than the Salomon Glen Coe Skyline™.

The Salomon Glen Coe Skyline™ will see the stars of Skyrunning competing in Scotland for what is expected to be the most competitive mountain running field seen for a generation in the UK. The €5,000 cash prize fund for the leading runners is sure to raise a few eyebrows and encourage the best British fell and mountain runners to compete.

Skyrunning World Champion (Ultra) Emelie Forsberg was enthusiastic in her support for the Salomon Glen Coe Skyline™ after finishing second overall in 2015: “Waow! Seriously the best race in this distance.”

The 2016 Salomon Glen Coe Skyline™ will be the last race in the new Skyrunner® World Series Extreme category, so two new World Champions (male and female) will be crowned at the end of the race.